Burdened with massive debt, the city of Berlin has gone to court to seek financial help from the rest of the country, where people say the capital should stop living beyond its means before asking others for money. 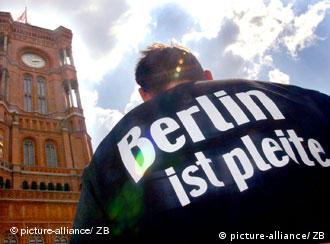 "Berlin is bankrupt," reads the man's T-shirt outside the German capital's city hall

Thilo Sarazzin knows Berlin's financial state better than most people and the picture he's painting is not a pretty one.

"If Berlin were a private company, the city would have gone bankrupt long ago," said Sarrazin, who is in charge of a growing, 60 billion-euro ($74.7 billion) debt burden as the city state's finance minister. 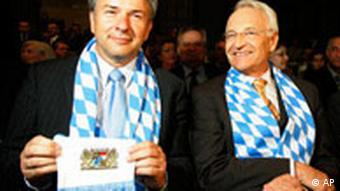 Wowereit (left) wants to get more than this scarf from his Bavarian counterpart, Edmund Stoiber (right)

Together with Berlin Mayor Klaus Wowereit, Sarazzin this week began trying to convince Germany's highest court to order the federal government and other German states to help repay the capital's debt.

"We cannot climb down from this debt mountain alone," Wowereit told judges at the Federal Constitutional Court, adding that his government had done everything it could to save costs. "Now we need federal solidarity."

Living beyond its means?

But the German government and most of Wowereit's fellow state premiers see things differently. They argue that Berlin has only itself to blame for its financial problems. They also say that the city continues to live beyond its means, citing the upkeep of three universities, three opera houses and six housing authorities as examples. Berlin should keep privatizing before asking others for money, they say.

"More should be saved, and there should also be efforts to capitalize on property holdings that Berlin still has," Gerhard Stratthaus, the finance minister of the southwestern state of Baden-Württemberg, recently said in a radio interview. 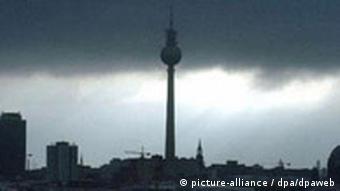 Bleak times ahead for Germany's capital?

Sarrazin counters that the city has already done more to cut costs than others: While expenditures of Germany's states on average rose by 3.3 percent during the last decade, Berlin has lowered them by 11 percent over the same period. More than 70,000 municipal jobs have been eliminated and more will disappear in the future, Sarrazin said.

"We have to do everything we can," he said, adding that the city has virtually exhausted its options to save money. The city has to pay 2.5 billion euros in annual interest payments alone.

Sarrazin hopes that federal judges will honor Berlin's efforts to deal with its debt -- the origins of which can be traced back to the city's special status after the war. 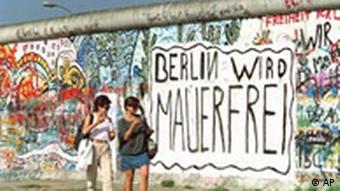 Almost all companies turned their back on West Berlin after 1945 and moved their headquarters to West Germany. Siemens moved to Munich and Frankfurt's emergence as Germany's financial capital only became possible because of Berlin's demise.

After the fall of the wall, the state-owned businesses in the eastern part of the city collapsed as well. The city government remains Berlin's most important employer and prevents the city's unemployment rate of some 20 percent from climbing even higher.

Banking on research and culture

Considering the city's lack of major industry, Berlin supporters say the capital should focus on research and culture as sectors to secure its economic survival.

"Berlin doesn't have mines, Berlin doesn't have an industry -- it has culture and is Germany's intellectual center," said Peter Raue, a lawyer and art patron, who helped bring the hugely successful "MoMA in Berlin" exhibition to the city in 2004. 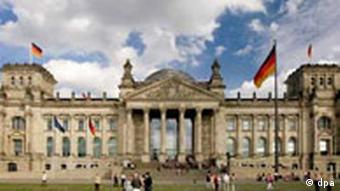 Should Berlin live more frugally as the seat of Germany's parliament?

But Berlin critics argue that Berlin should stop demanding money by arguing that it needs to shine as Germany's capital.

"I think the rest of the republic would be very happy if Berlin would fulfil its obligations as a capital by allowing the federal government to do a good job," said Claudius Seidl, a journalist who regularly writes about Berlin's lack of style. "Everything else is not that important."

Federal judges are expected to issue a ruling by the summer.

Berlin became the German capital after reunification, but many civil servants remained in the old one, Bonn. Despite a new debate about the costs of the divide, it's likely to stay that way -- at least for now. (Feb. 3, 2006)