The death toll from a train crash in Quebec on Saturday has risen to 20, officials have said, with a further 30 people missing, "presumed dead." The railway owner has said the accident was the fault of a lone engineer. 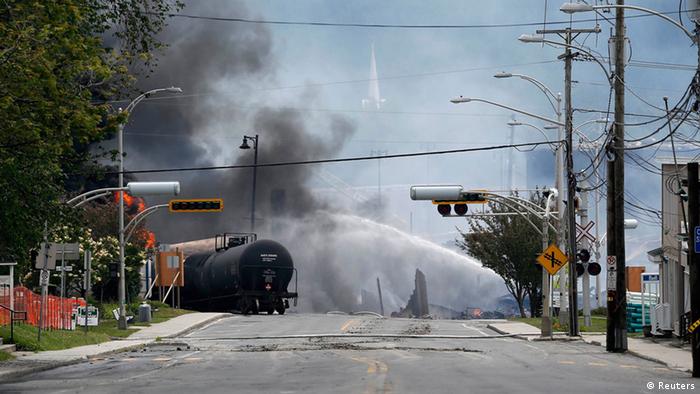 Quebec police inspector Michel Forget told reporters on Wednesday that the death toll in the train explosion had risen to 20 and that 30 people were "missing and most probably dead in this tragedy."

"It is with great sadness that I give you this news," he said. Police had said earlier that a further 10 people were missing but they have since been located.

The rail accident occurred early on Saturday when a parked Montreal Maine & Atlantic (MMA) train came free and rolled downhill towards the town of Lac-Megantic without a driver. The train was hauling 72 cars of crude oil when it derailed and blew up just after 1 a.m. in the center of the town. The massive fire that ensued forced some 2,000 residents to flee their homes, though many began returning on Tuesday.

Only one of the bodies recovered has been identified so far. Genevieve Guibault of the coroner's office said that identifying the other remains will be "very long and arduous work" because of the fire's intensity.

Edward Burkhardt, chairman of the MMA, visited the scene of the crash on Thursday and said an engineer had failed to properly set the brakes on the train.

"Adequate hand brakes were not set on this train and it was the engineer's responsibility to set them," Burkhardt said, adding that had the brakes been properly applied "we wouldn't have had this incident."

"We think he applied some hand brakes, but the question is, did he apply enough of them?" Burkhardt said. "He said he applied 11 hand brakes. We think that's not true. Initially we believed him, but now we don't."

The engineer has been suspended without pay, according to Burkhardt, and is under "police control."

Burkhardt had previously blamed firefighters in Nantes, where the train had stopped for a crew change. Firefighters had put out a small unrelated fire and shut down the locomotives engines, thus unknowingly unlocking the train's air brakes.

Police have said they were pursuing a number of possibilities as part of their criminal investigation, including criminal negligence and tampering with the train before its crash. The center of Lac-Megantic has been cordoned off and is being treated as a crime scene.

At a press conference before Burkhardt's arrival, Quebec Premier Pauline Marois criticized his company's response to the incident.

"We have realized there are serious gaps from the railway company from not having been there and not communicating with the public," Marois said, calling Burkhardt's attitude "deplorable" and "unacceptable."

Tunisia: Youths clash with police over economic woes 0m ago