At least 100 people have been killed in a garment factory fire on the outskirts of Bangladesh's capital, Dhaka. The cause of the blaze is not yet clear but officials suspect an electrical short-circuit. 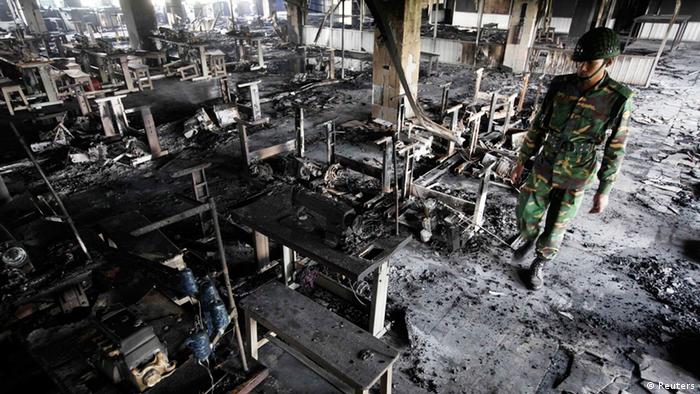 The fire at the multi-story factory in the Ashulia industrial belt started on the ground floor and quickly spread late Saturday. Firefighters took nearly five hours to extinguish the flames.

Most of the victims died as they jumped from the building to escape the flames, a police official said. The factory was operated by Tazreen Fashions.

The cause of the blaze was not immediately clear but fires due to short circuits and faulty electrical wiring are common in Bangladeshi garment plants, which use cheap labor to produce clothes that are shipped to Western countries.

Fire Brigade Director General Brigadier General Abu Nayeem Mohammad Shahidullah told reporters that they suspected the fire originated from an electrical short-circuit. "We can say it for sure after investigation."

Meanwhile, in Bangladesh's southeastern port city of Chittagong at least 13 people were killed and dozens are feared missing after a motorway flyover under construction collapsed, police said Sunday.

"So far 13 dead bodies have been recovered," sub-inspector Mohammad Alauddin told the AFP news agency, adding that military rescue teams had been called in to help with the search for victims.