Death sentences for murderers of albino woman in Tanzania

A court in Tanzania has sentenced four people to death for murdering an albino woman to use her limbs for rituals. The verdict comes amid a wave of killings of albinos and despite a moratorium on capital punishment. 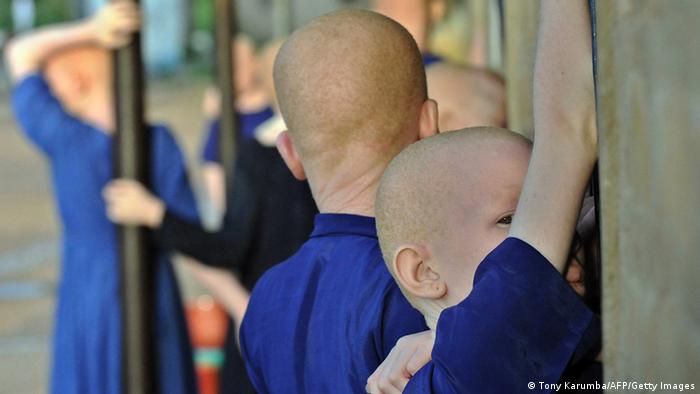 The court handed down the death sentence to the victim's husband, Charles Nassoro, and three others for the murder of a 22-year-old albino woman. They hacked off her legs and right hand with an axe and machete while she was eating dinner in her village in 2008.

High Court Judge Joaquine Demello told state radio that the prosecution had proved the case "beyond reasonable doubt." She also told the Citizen daily that the sentence had taken into account "the escalating killing of people with albinism in the country."

According to UN figures, at least 75 people with albinism have been killed in Tanzania since 2000, including a one-year-old baby a few weeks prior to Friday's verdict.

Albino body parts, which are often used in rituals designed to guarantee success in love, life and business, can sell for around $600 (547 euros), with an entire corpse fetching up to $75,000, according to UN figures.

The use of albino parts for witchcraft is known in other African countries, but attacks are especially prevalent in Tanzania. There are currently 17 people on death row for killing albinos.

Albino rights activists on Friday called for the executions to be carried out promptly. "We want all those convicted of killing persons with albinism to be hanged without delay in order to send a strong message that these attacks will no longer be tolerated," the chairman of the Tanzania Albinism Society (TAS), Ernest Kimaya, told the Reuters news agency.

But Tanzania has not conducted an execution since 1994 and has had a de facto moratorium on capital punishment since then.

Earlier this week Tanzanian President Jakaya Kikwete pledged firm action to stop the murders. "The government has long tried to do everything possible to stop the killings, we are very serious with this. But we still need to enhance our efforts to bring to an end these killings, which are disgusting and a big embarrassment to the nation," Kikwete said in a statement.

The UN fears that attacks on albino Tanzanians will rise ahead of elections later in the year, as candidates and supporters turn to witchcraft to "influence" their chances.

Albinism is a hereditary genetic condition which causes a total absence of pigmentation in the skin, hair and eyes. It affects one Tanzanian in 1,400, often as a result of inbreeding, experts say. In the West, it affects just one person in 20,000.

Tanzania must find an albino girl kidnapped in December, the country's top UN official said. At least 74 albinos have been murdered in the east African country since 2000 with only 10 convictions for the crime. (09.01.2015)

White skin, pale pinkish eyes and light hair - those are the physical traits that some connect with albinism, the condition affecting #dealwithme’s Leonidah. Find out what causes albinism and how it’s diagnosed. (14.11.2014)