At least eight people have been killed in back-to-back earthquakes near a remote Philippines island group. Terrified residents have gathered outside for their safety. 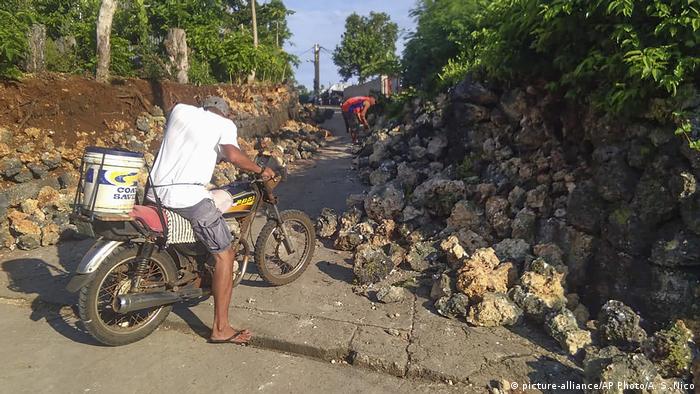 At least eight people have been killed and dozens more injured after an earthquake and aftershock struck a sparsely populated island group in the northern Philippines.

The earthquakes — registering magnitudes of 5.4 and 5.9 — rattled the province of Batanes early Saturday, damaging buildings and cracking paved roads.

Many people were asleep when the first tremor struck at 4:15 a.m. (2015 UTC), followed by another stronger one more than three hours later. In the municipality of Itbayat, authorities urged the entire town's population of more than 1,000 people to gather in the main square.

'Safest for everyone to be outside'

"We have been getting aftershocks every two hours and it's safest for everyone to be outside of their houses," Roldan Esdicul, head of the provincial disaster relief agency, told Manila radio station DZMM. "Most of those killed were sleeping and buried by their collapsed houses."

Mayor Raul de Sagon told the Agence France-Presse news agency that in addition to the six fatalities, around 60 others were hurt.

Most of the damaged buildings were constructed from concrete and stone to protect against typhoons that batter the islands, located about halfway between the Philippines' largest island, Luzon, and Taiwan.

The Philippines is located along the Pacific Ring of Fire, a seismic prone basin where around 90% of the world's earthquakes occur.

Green Energy in the Philippines

Green energy in the Philippines

Relocating to escape flooding in Manila — a blessing or a curse?

Many slum dwellers in the Philippine capital Manila live in constant fear of flooding. Now their shelters, often located near water, are to be cleared away as part of the city's flood management plans. (23.07.2019)

The UN Human Rights Council will investigate extrajudicial killings in the Philippines. At least 6,000 people have been killed by police in the war on drugs, and rights groups think the number is much higher. (11.07.2019)