Intense fighting has erupted between Kyiv troops and pro-Russian rebels in eastern Ukraine. The violence signifies the most serious escalation in the conflict since a February truce deal. Both sides are trading blame. 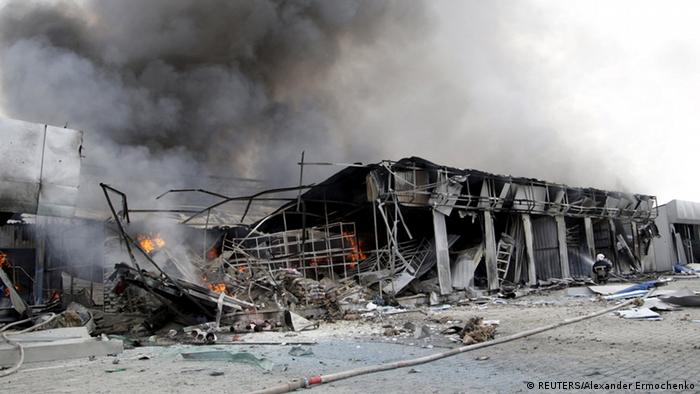 A major battle erupted Wednesday on the outskirts of the rebel stronghold, Donetsk, signaling a departure from the occasional low-level flare ups that had been reported since a ceasefire agreement was signed four months ago.

Both sides have swapped blame for the latest bout of violence, which could threaten to plunge the country back into full-blown war.

Ukraine military officials said in a statement that pro-Russian separatists had deployed some 1,000 fighters and dozens of tanks in a large-scale offensive on the government-held town of Marinka, about 30 kilometers (19 miles) west of Donetsk.

It said that at least one person was killed in the dawn attack. The government statement further accused the rebels of violating the truce deal, which requires all sides to pull back heavy weapons from the front line. But Vladimir Kononov, head of separatist armed forces, said his insurgents had only acted to defend themselves from an assault launched by Ukraine's military.

"The Ukrainian side carried out a provocation by shelling our positions practically along our entire front," Kononov said.

The separatists reported that at least 15 people had been killed and dozens injured by bombing in parts of the Donetsk region under their control.

Ukrainian Prime Minister Arseniy Yatsenyuk blamed Moscow for the fresh fighting, saying that "today Russia has once again violated the 'ceasefire' agreement...Its terrorists began a military operation." Kyiv and several Western governments have accused Russia of supporting the rebels, although Moscow denies this.

Kremlin spokesman Dmitry Peskov said Wednesday's violence was caused by "provocations" by the Ukrainian armed forces, and called for the "unconditional" implementation of the February peace deal.

Negotiators from both sides of the conflict met for talks in Belarus Tuesday, but the meeting ended with little progress. Another session is scheduled for the weekend.

More than 6,400 people have died in fighting since the separatist insurgency broke out in April 2014, according to figures from the United Nations.

In Kyiv, Steinmeier calls for more from Russia and Ukraine

Germany's foreign minister has called for faster reforms from Kyiv, also saying that the truce in eastern Ukraine's conflict had become "fragile." Separately, he accused Russia of instigating the fighting. (29.05.2015)

Separatist rebels in eastern Ukraine have said one of their top commanders, Alexei Mozgovoi, was killed Saturday after his vehicle was hit by a bomb and gunfire. Six other people were also killed in the attack. (24.05.2015)

Ukraine's president has said in a German interview that Vladimir Putin's speech about calling up reservists was "no news for me." He said the process had already begun earlier. DW rounds up the latest.

Deportation, agonizing interrogations and detention: Human Rights Watch has accused Russia of using a "filtration system" and other violations of international humanitarian law on Russian-held territory in Ukraine.