German scientists at the Fraunhofer Heinrich Hertz Institute have transmitted the equivalent of 240 DVDs per second over a fiber optic link, beating its own record, previously achieved in 2005. 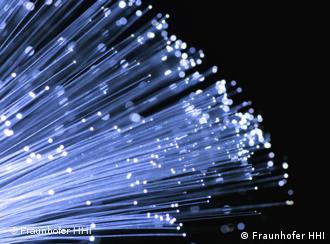 240 DVDs in one second, transmitted over fiber optic

German and Danish scientists have set a new world record in data transmission by sending a set of files over a 29 kilometer (18 miles) fiber optic link in Berlin at a speed of 10.2 terabits per second, or approximately all the data included on 240 DVDs.

Scientists from the Fraunhofer Heinrich Hertz Institute (HHI) in Berlin, and the Technical University of Denmark presented their results at the Optical Fiber Communications conference in Los Angeles on Thursday.

"So far no one else in the world has reached such a high serial rate transmission using a high pulse repetition rate, transmitted by fiber optics," said Carsten Schmidt-Langhorst, an HHI researcher, in an interview with Deutsche Welle.

The scientists beat their own record set in 2005, when they managed to transmit at a speed of 2.56 terabits per second.

Even the HHI researchers themselves were surprised at this latest achievement.

"When we reached the record of 2.56 terabytes per second in 2005, I thought we were getting close to the limit of what's doable," Schmidt-Langhorst said. "Now, about six years later we managed to provide a serial data transmission speed four times as high. I don't want to exclude the possibility of an even faster transmission in the future."

In order to achieve this astonishing speed, the scientists increased the data transmission pulse repetition rate, which means that the light flashes transporting the data are sent faster and with shorter breaks. In addition, they also increased the amount of data encoded in each pulse to four bits, instead of the usual one. 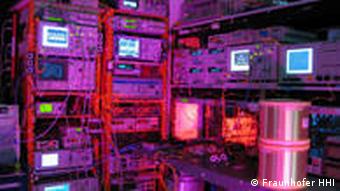 Schmidt-Langhorst noted this was merely the first step, and that 29 kilometers on the lab's network was not the same as a larger real-world network, where the signal needs to be amplified every 80 to 100 kilometers.

In recent years, there have been other kinds of experiments aiming at an increase of the total data capacity which is transported over a single optical fiber.

Just shortly after HHI presented its record at the conference in Los Angeles, scientists from NEC Laboratories America in Princeton announced a total capacity of 101.7 terabits per second on a single optical fiber by using 370 lasers. That leaves each laser with a speed of 294 gigabits per second.

However, HHI reached its speed of 10.2 terabits per second with one single laser.

Scientists in the field were quick to laud this achievement in data optics.

Govind Agrawal, a professor of optics at the University of Rochester, in the United States, said that HHI's 10.2 terabits per second transmission at a single wavelength can be indeed considered a world record.

But, he considers wavelength division multiplex schemes, those with multiple lasers, superior to serial transmissions at speeds beyond 0.1 terabits per second.

He also cautioned that the current HHI breakthrough, while promising, was not ready for commercial and public use, most notably because its signal degrades so quickly.

"The scheme of HHI is not likely to be a practical reality, because it requires transmission of femtosecond optical pulses that degrade rapidly inside optical fibers because of chromatic dispersion effects," he said in an e-mail to Deutsche Welle.

Others, like Raymond Hansen, a professor of computer and information technology at Purdue University, also in the United States, said that the new record can be considered as "an absolutely critical advancement for data communications".

"However, these types of advancements will not be readily available for consumers in the near future, since the service providers have to implement this technology first," he said in an e-mail sent to Deutsche Welle. "But there is the potential for an increased capacity for consumers after the critical backbone infrastructure is in place to support the ever-increasing data rates demanded by the consumer."

Other member states have paid lip service to the idea of giving their citizenry universal access to the internet, but none seem to be willing to implement it into law anytime soon. Will Finland's move change that? (06.07.2010)