Some 10,000 German children who fled unaccompanied to Denmark as World War II drew to a close in the spring of 1945 were subjected to "inhumane treatment," according to a Danish doctoral thesis presented this week. 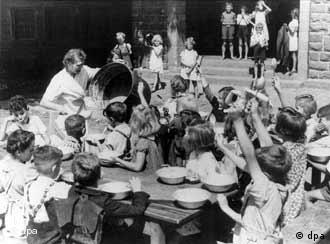 The study says German children were victims of ethnic hate

Historian and physician Kirsten Lylloff's thesis, presented at Copenhagen University, claims that the thousands of unaccompanied children who sought refuge in the Scandinavian country from the Russian troops pouring into Germany as the war ended had been abused.

The refugee children, the youngest of whom was three years old, were locked up for two years in camps surrounded by barbed wire where they were kept under close surveillance, fed insufficient amounts of food and lacked medicines and enough clothing, according to Lylloff.

She described the treatment of many of the children as "harsh and inhumane," calling it "the greatest contemporary humanitarian catastrophe in Denmark."

"It is clear that the German children, subjected to feelings of ethnic hate from the Danes, paid dearly for their parents' mistakes," Lylloff said in an interview on Danish public television station DR1.

"And when we hear about ethnic cleansing and talk about the monstrosities committed against the Hutus and the Tutsis in Rwanda for instance, or in the Balkans, we should remember that we were driven by the same norms due to ethnic hatred," she told Danish daily Politiken.

Lylloff's thesis, written after nearly two years of pouring over witness testimonies and other research, contradicts most Danish history books which tend to portray the Danish treatment of Germans after the war as good.

"This chapter should be rewritten, because the reality was quite different," she said, pointing out that neither Danish authorities nor the Danish Red Cross had come to the German children's rescue.

"This is a sad, black chapter in Danish history on a humanitarian level of which we should be ashamed," head of the Danish Red Cross Joergen Poulsen told AFP.

He insisted however that the Danish government at the time had not wanted the Red Cross to help the children, and that local units of the organization that had wanted to help couldn't due to "the animosity of the Danish population towards the Germans."

Tuesday's opening of a Daniel Libeskind-designed Jewish museum in Denmark casts light on one of the few happy chapters in WWII history: the rescue of 7,000 Danish Jews from Nazi persecution. (June 6, 2004)