Out of the merger of Germany's Daimler-Benz and the U.S. carmaker Chrysler came DaimlerChrysler in 1998. But after a honeymoon in hell, the world's third largest car manufacturer is looking forward to better days. 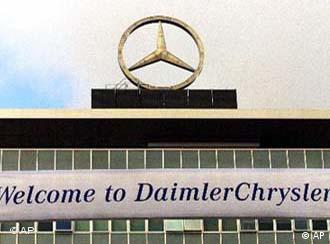 Things can only get better for DaimlerChrysler, industry analysts say.

It was dubbed "a wedding made in heaven" by the marriage brokers five years ago.

In a series of secret meetings in early 1998, the chief executives of Germany's Daimler-Benz and America's Chrysler met and sealed a deal to merge the carmakers. When the news finally leaked to the Wall Street Journal in May, negotiations had nearly been completed. On May 7, Daimler CEO Jürgen Schrempp and Chrysler CEO Bob Eaton confirmed the merger and proclaimed the creation of the DaimlerChrysler.

Five years on, investors are not exactly in a celebratory mood about the so-called “merger of equals.” Instead of the two companies combining forces and synergies as was promised at the time, the merger was, in effect, a takeover. Daimler-Benz acquired Chrysler, improving its position in its most-important auto market, the United States.

At the same time, however, Daimler-Benz inadvertently burdened itself with numerous problems that, like those associated with the purchase of a used car, only came to the surface in time.

Chrysler in the doldrums

In January 2000, four months after the merger became official, Chrysler reported first-quarter losses and Eaton tendered his resignation as joint chief executive. Daimler’s Jürgen Schrempp became the sole CEO and, once the extent of Chrysler’s problems came to light, brought in German Dieter Zetzsche to reorganize its ailing U.S. partner.

Zetzsche slashed 26,000 jobs and closed six factories, but he got Chrysler back on its feet in 2002 and he’s now seen as the company’s savior in Detroit. Operative profits reached €152 million in the first quarter of this year.

Still, the company is not out of danger. Competition in the U.S. remains fierce, particularly in light of the prices wars spurred on by General Motors and Ford.

DaimlerChrysler moved further into the Asian market in 2000, buying 37.1 percent of Mitsubishi Motors, another carmaker in the red. Schrempp sent in another German manager, Rolf Eckrodt, to take the reins and lead the Japanese firm back into the realm of profit-making.

Times have been especially rough for the German-American firm since its initial public offering in 1998. Shares that sold for €100 at the time are now trading at around €30. At the time of the merger, Daimler was valued at €53 billion and Chrysler at around €32 billion. Five years later, the combined companies have a market capitalization of about €30 billion, less than half their combined original values.

But at the time of the merger, DaimlerChrysler executives had the companies' long-term perspectives in mind. Now it can boast that it is not only the world’s third-largest carmaker but also the number one commercial vehicle manufacturer. And industry analysts agree that its best times still lie ahead.

The “Car Chancellor” Loses Some of His Sheen

Already under fire for raising taxes, Chancellor Schröder is facing new criticism from his one-time allies in the automotive industry. They warn that proposed tax hikes on company cars could cost thousands of jobs. (Nov. 25, 2002)

In Motor City Detroit, German automakers from Volkswagen to Porsche are demonstrating their plans to conquer the sport utility sector. They also predict a big year for the New Mini and the VW Beetle Convertible. (Jan. 8, 2003)