The Czech Republic is in political chaos after a spectacular police raid that prompted Prime Minister Petr Necas to announce his resignation. Necas will stay on as caretaker leader until a new government is named. 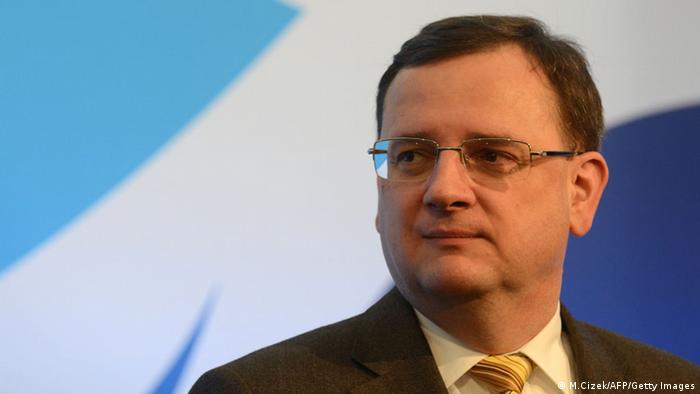 Suddenly, he looked relaxed and self-confident once again. On Sunday night, Necas faced the cameras and announced his resignation - both as the head of the ODS party and as prime minster.

"I am a fighter," he said "but I always knew that I didn't want to be in the way of what is the best way out of a problem." Necas formally tendered his resignation to President Milos Zeman on Monday.

The announcement follows a corruption and spying scandal that has dominated headlines in the country for most of the past week. Now that the center-right government has collapsed, it is mainly in the hands of the left-wing opposition Zeman, who will decide what to do next.

It all started with a spectacular police raid last Thursday, involving 400 officers, many of them masked, searching the government offices on the banks of the Vltava River as well as 30 other buildings. 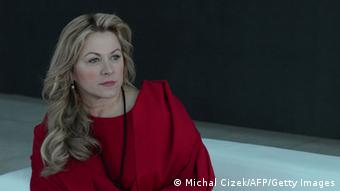 Prosecutors have not yet released details about the affair, prompting widespread speculation in the country. What seems to be clear is that the accusations center around graft and abuse of power, but not whether the two are related in this case.

The prime minister's top aide, Jana Nagyova, is believed to have used the military intelligence service to obtain information on Necas' wife, news which has, apparently, been confirmed by the head of that service.

Then there is, allegedly, a major corruption scandal involving the top echelons of Czech political power that is being investigated.

It is not yet clear whether Necas, who has a squeaky clean image, is involved in the affair. What is clear is that the accusations involving his private life have been his downfall. Just days before the raid he and his wife announced they were going to split, which observers in the Czech Republic reckon is connected to the spying scandal. 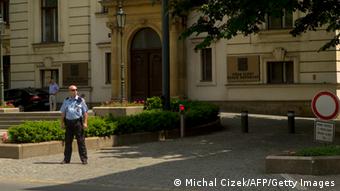 The government's headquarters in Prague were searched

It's an open secret in the Czech Republic that substantial sums from the state's coffers end up in private accounts via public contracts. So far, no one has been able to prove anything - possibly until now.

Among the houses searched in the raid are two luxury villas belonging to two men known as the "godfathers" because of their influence in Czech politics.

"We have confiscated material that is invaluable to us," said leading investigator Robert Slachta, adding that it would take weeks to analyze it.

It is those comments that have fed rumors that what has come to the surface is just the tip of the iceberg. Observers hope that the police will be able to catch the bigwigs at the helm of a mafia-like network connecting politics and business in the country.

Not many people believe Necas is personally involved. He is known for his efforts to improve the independence of the judiciary and the police from the government in Prague. 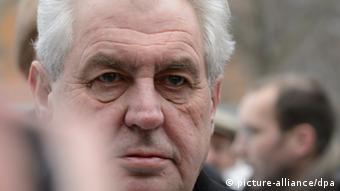 President Zeman is to appoint a new government

"If there is a suspicion, we have to investigate, no matter who is being affected," he said in parliament on Friday.

The fight against corruption started in earnest around a year ago. A new generation of qualified police officers and prosecutors, who are not intimidated by the government, have made it into top positions.

Many ordinary Czechs - themselves fed up with corrupt politicians - have started initiatives designed to promote clean business practices and the effective prosecution of crimes.

It's up to the president

President Zeman is now in the driving seat. The 68-year-old, who has only been in office since March, must decide who to appoint to form a new government. He is free to choose whoever he wants, whether they are from the existing coalition or the opposition Social Democrats he has been associated with.

He could call snap elections or appoint a caretaker government made up of civil servants until the regular date for elections in 2014. Many believe that this way, he would be able to exert as much influence as possible.

Polling stations in the Czech Republic have reopened for the second and final day of voting. The presidential contenders are leftist ex-premier Milos Zeman and conservative Foreign Minister Karel Schwarzenberg. (25.01.2013)

A junior partner in the Czech Republic's three-party coalition has called on its cabinet ministers to quit. The action, stemming from a dispute with the prime minister, puts the government's future in doubt. (20.12.2012)