Czech PM Mirek Topolanek, who is also EU President, caused a flap when he said the US was on the "road to hell" with its spending plan. The EU-US summit in Prague on April 5 is likely to be business as usual, however. 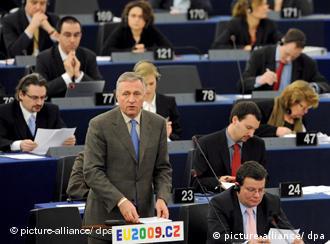 US missteps are the "way to hell", said the Czech PM in Strasbourg.

Czech Prime Minister Mirek Topolanek, who was also in Strasbourg on Wednesday in his double role as the EU's current president, highlighted the transatlantic divide in handling the global economic crisis by calling US fiscal spending "the road to hell."

"Not only does the US repeat the mistakes it made in the 1930s such as the tendency towards large stimulus (spending), but calls for protectionism, such as the "Buy American" campaign," he said in a speech to the European Parliament.

"All these steps, their combination, and what's worse, an initiative for setting them up permanently, are the road to hell," said Topolanek, whose country is midway through the EU's six month rotating presidency.

Topolanek had been voicing a concern about the different approaches taken by the euro zone's European Central Bank and the US Treasury to combat the global recession in the run-up to a G20 summit of world leaders in April.

Washington is injecting trillions of dollars to prop up the banking system in order to pull the US out of its worst recession in decades. The Obama administration wants to commit 5.5 percent of US output to recovery efforts, whereas the EU has earmarked 400 billion euros ($543 billion), which is equivalent to 3.3 percent of the 27 nation bloc's gross domestic product for economic stimulus measures. 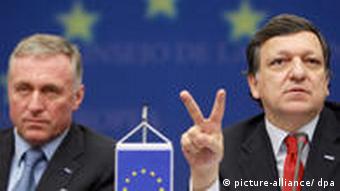 Czech Vice Prime Minister Alexandr Vondra later tried to play down Topolanek's remarks, telling journalists in a news conference that his countryman did not say "hell." However an AFP news service check of the original recording found that Topolanek did indeed make the comment.

Other European leaders, such as Germany's Angela Merkel have also said that the scale of US deficit spending that leads to inflation is not the solution to the EU's problems, but it was the Czech prime minister's undiplomatic tone that raised hackles.

Martin Schulz, a German Social Democrat who is head of a parliamentarian group in Strasbourg told Topolanek "You have not understood what the task of the EU presidency is," later describing the "hell" remark as "not the level on which the EU ought to be operating with the US."

What made Topolanek's remarks even more impolitic was that the Czech prime minister's governing coalition had lost its parliamentary majority the day before, forcing his resignation, which will probably take place after Prague's EU presidency ends in June.

Topolanek is still expected to host US President Barack Obama at a US-EU summit in Prague next month following the G20 meeting in London.

EU-US meeting in Prague will be business as usual

US officials in Washington said that Obama's meeting with the Czech prime minister will go ahead as planned. "The president considers his first meeting with the European Union to be an important opportunity to discuss trans-Atlantic cooperation on a broad range of issues," national security council spokesman Mike Hammer was quoted as saying to AFP.

"The president also is looking forward to deepening our relationship with the Czech Republic and people. The fall of the Czech government is the result of a democratic process."

The EU and US responses to the current economic crisis are "increasingly converging," and the EU is "working hard with our American and other international partners" ahead of a summit of the G20 economies, European Commission spokeswoman Pia Ahrenkilde Hansen said.

The EU itself is "fully united" ahead of the summit, she stressed.

Mirek Topolanek will likely serve out the term of his country's EU presidency, but the bloc's politicians are worried about the legitimacy of a leader ousted by his own government and the fate of the Lisbon Treaty. (25.03.2009)

The Czech government has collapsed after Prime Minister Mirek Topolanek lost a vote of confidence in parliament. It's unknown what Topolanek's planned resignation will mean for the Czech European Union presidency. (24.03.2009)

Germany, France and the Czech presidency of the European Union are calling for EU leaders to hold talks the end of February to coordinate the bloc's response to the economic crisis. (09.02.2009)