Crown Shyness - When trees don't want to touch each other

Heads up, please! Otherwise, you might miss an impressive spectacle in the forest canopy: Trees seem to be very courteous when it comes to their wooden pals. Without a doubt, it's sometimes very worthwhile to venture out into nature. Not just for of a gulp of fresh air but also because you may see a very special, instagrammable behavior if only you would raise your eyes heavenward.

If you look in the right place, you might just spot small and large gaps between the tops of trees, as if they are somehow trying to avoid touching each other. Or to put a more positive spin on it: as if the trees are trying to give each other space. That's nice, isn't it?

This is actually a well-documented phenomenon. It's believed to occur primarily in trees of the same species, although, the behavior has also been observed across species. Where it occurs, it's immediately recognizable by the narrow yet clear gaps between the tree crowns. It looks as though the canopy was torn and moved slightly.


A recent tweet by author Robert Macfarlane cast a light on the beautiful patterns that can result from this behavior.  In his books, Macfarlane explores natural phenomena and environmental themes. Shy trees fit in perfectly.

Why do they do it?

Macfarlane isn't the first to notice the phenomenon; it was first described in the 1920s. But scientists still aren't sure how and why trees do this. 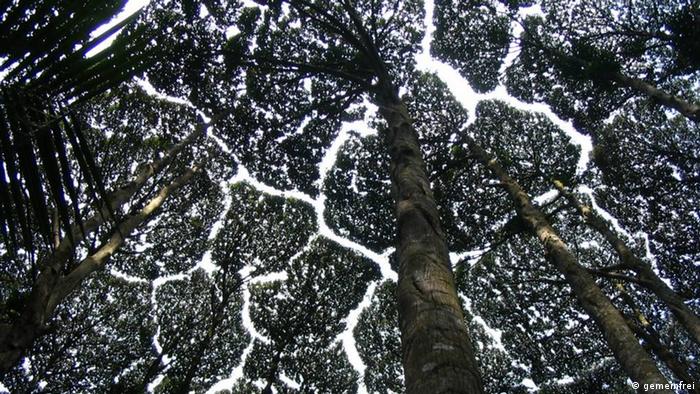 One theory assumes a tree's leaves can feel when they are approaching another tree. Once they sense a nearing neighbor, the growing process halts, ensuring that light can penetrate the canopy and photosynthesis continue.

Another possible explanation is that this is a defense mechanism against leaf-eating insects. The gaps mean bugs wouldn't be able to reach other trees, impeding their spread.

The most likely theory is that the trees simply do not want to hurt themselves. The phenomenon is often observed in windy areas, leading scientists to assume that the gaps between the crowns make it less likely that branches will collide or get wedged together. This reduces the "risk of injury."

Whatever the answer is, a certain truth remains: There's a lot to discover in nature when you shift your view even a little.

How do we fight wildfires as the planet heats up?

As wildfires again burn out of control in the US and southern Europe this summer, strategies to repel and recover from these climate-fueled mega blazes are changing.

Ukraine: Situation at Europe's largest nuclear plant 'out of control'