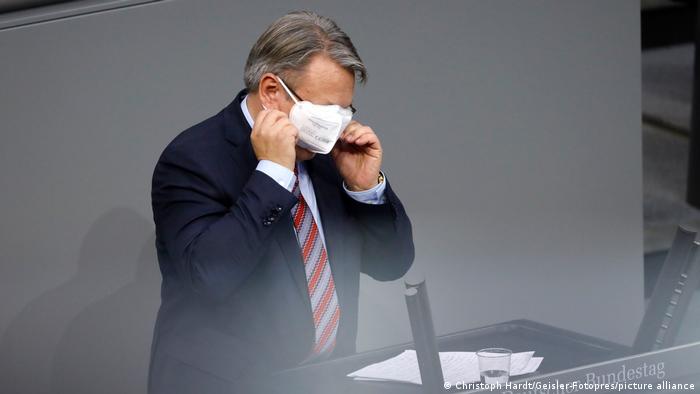 Georg Nüsslein has protested his innocence

A senior member of the German parliament, Georg Nüsslein, pledged Friday to fight allegations of taking bribes from a face mask producer.

The lawmaker also temporarily stepped down from his position as deputy leader of the ruling conservative bloc in the Bundestag.

Speaking to DW, Bundestag deputy Dirk Wiese said he was surprised and angered by the scandal.

"The fact that something like this is possible is quite appalling," said Wiese, who is a member of the center-left Social Democrats.

"And it is also infuriating, because in those cases, the reputation of politicians as a whole is stained," he said. "And that always angers me."

Pushing for a registry of lobbyists

Wiese also accused his conservative colleagues of "blocking" a proposed registry of lobbyists that would prevent such cases in the future. He described the latest allegations as a "warning shot."

Also on Friday, the general secretary of Nüsslein's CSU party, Markus Blume, admitted that his colleague was facing "serious charges" that would need to be "cleared up without any gaps."

At the same time, a party representative confirmed that CSU leaders spoke with Nüsslein.

"There is still the presumption of innocence," the spokesperson said.

The CSU is the Bavarian sister party of Chancellor Angela Merkel's Christian Democrats.

Media reports claim the 51-year-old received €660,000 ($800,000) via a consultancy firm to ensure a face mask producer was awarded government contracts.

The Bundestag, the lower house of Germany's parliament, voted unanimously to lift his immunity.

"Our client will defend himself from the charges raised by the prosecutors," Gero Himmelsbach told the Reuters news agency.

However, it was unclear when Nüsslein will be able to publicly comment on the charges amid the "obviously complex investigation."

The move comes after investigators raided 13 properties in Germany and Liechtenstein over the charges.