Seven experts who faced prison terms for failing to give adequate warning of an earthquake in central Italy in 2009 have been acquitted on appeal. The verdict had outraged the scientific community. 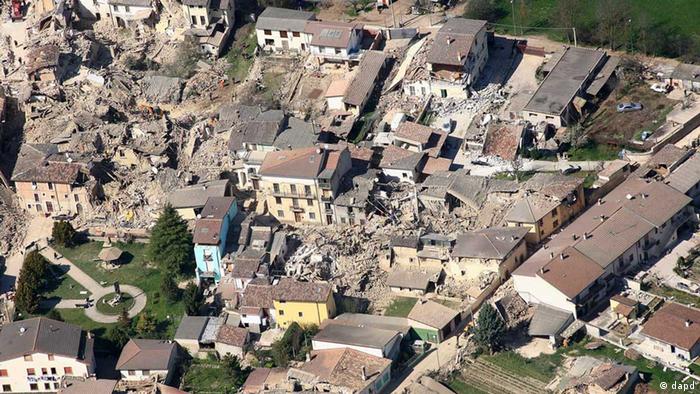 An appeals court in Italy on Monday overturned manslaughter convictions against seven natural disaster experts who faced prison sentences for having allegedly falsely reassured residents ahead of a 2009 earthquake that ended up killing 309 people in the central city of L'Aquila.

The court, also in L'Aquila, cleared all seven of the major charge against them, saying that no crime had been committed.

The experts had been sentenced to prison terms of six years each in 2012; however, under Italian law, convictions are not enforced until an appeals trial has been held.

The defendants were all scientists or geological or disaster experts who had been members of a government advisory panel on natural disasters. They had been accused of giving "inexact, incomplete and contradictory information" about whether the low-level seismic activity in the L'Aquila region in the months preceding the April 6 disaster could herald a dangerous quake.

At a special meeting held to calm anxious residents a week before the 6.3-magnitude quake hit, the panel concluded that it was "unlikely" that a big earthquake would follow the tremors, but also stressed that "there are no instruments to make forecasts."

The former deputy chief of Italy's civil protection authority, Bernardino de Bernadinis, told press at the time that there was "no danger" because the small shocks were acting to relieve seismic pressure.

Relatives of the victims claimed that such reassurances had persuaded many residents to remain in their homes, thus causing their death in the quake. The relatives took legal action against the experts, leading to their conviction.

The ruling was met with dismay by the scientific community, which argued that the convictions were based on a complete misunderstanding of the science used to calculate the probability of an earthquake.

Prosecutors in the case can still try to reverse Monday's acquittal in a higher court.

De Bernardinis was the only one of the seven defendants to have minor convictions confirmed at the appeal.

A court in l'Aquila has convicted four people of manslaughter after a university dormitory collapsed in a 2009 earthquake, killing eight students. The defendants were involved in restoration work on the building. (16.02.2013)