Couple arrested on charges of extorting Italian premier Berlusconi | Europe| News and current affairs from around the continent | DW | 02.09.2011

An Italian couple has been arrested on suspicion of extorting around half a million euros from Prime Minister Silvio Berlusconi. Prosecutors said the premier paid the sum to guarantee their plea in a prostitution case. 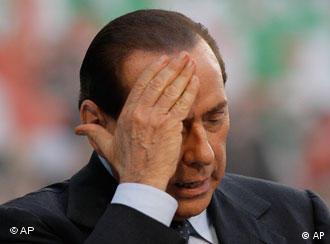 Berlusconi is not under investigation in this latest case

Italian Prime Minister Silvio Berlusconi has come under renewed fire in the Italian press, after a businessman linked to a prostitution case was arrested on suspicion of extorting the premier.

Giampaolo Tarantini from the southern city of Bari and his wife were detained, with prosecutors saying payments of up to half a million euros (around $700,000) from Berlusconi had been identified in their possession.

The payments, for which Berlusconi is not under investigation, were believed by one prosecutor to have been linked to an ongoing probe into Tarantini in which he has been charged with aiding and abetting prostitution.

Naples prosecutor Francesco Greco has alleged that Berlusconi made the payments to ensure Tarantini entered a plea bargain rather than letting that case go to trial.

Such a move would limit publication of potentially embarrassing telephone intercepts - which prosecutors say are in their possession - involving prostitutes who attended soirees at Berlusconi's private residence.

'Helping a family in need'

Tarantini has admitted to paying high-end hooker Patrizia D'Addario and other women to attend Berlusconi's parties, though maintains the prime minister was unaware they were prostitutes.

Berlusconi has admitted to making the payments to the Tarantini's, but said he was helping a family in need and had asked nothing in return.

D'Addario, for her part, has said she slept with Berlusconi at his Rome residence and tape recorded the encounter. The conservative leader has maintained he never paid for sex, but has never apologized for his lifestyle.

A warrant has also been issued for the arrest of another man with whom Berlusconi allegedly conducted a controversial phone call. Prosecution transcripts of the call appear to show Berlusconi using repeated profanities and saying he intended to leave Italy, lamenting that the country made him sick.

The prime minister is facing a string of corruption, tax evasion and sexual misconduct cases which are ongoing.

Local elections in Italy appear to be spelling bad news for Prime Minister Silvio Berlusconi. His party's losses call into question Berlusconi's ability to keep his government together until national elections in 2013. (30.05.2011)

A Milan court has completed preliminary matters in the sex trial of Italian premier Berlusconi and adjourned the trial until May 31. Berlusconi did not appear for the brief court session, which lasted only a few minutes. (06.04.2011)