Costa Rica have turned Group D completely on its head. The 1-0 upset for "Los Ticos" over Italy means England have no chance to progress. France, meanwhile, ran riot against Switzerland, winning 5-2 in Salvador. 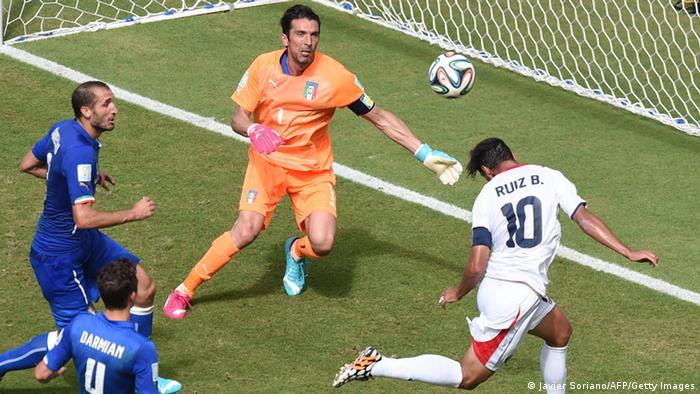 The early match in Recife was very slow to get going with Italy struggling to get past the high-defending Costa Ricans. On the half-hour mark, Andrea Pirlo sent through striker Mario Balotelli, but his lob was well wide of the mark.

Just as the Azzurri looked to have found a key to unlock Los Ticos, Joel Campbell was fouled inside the box in what should have been a penalty for the underdogs. And just before half-time, Junior Diaz found Bryan Ruiz for a solid header that put giant-killers Costa Rica ahead 1-0.

Italy substituted in three additional strikers in the second half, but failed to generate any clear chances. The 1-0 win was the second straight upset for Costa Rica after their 3-1 triumph over Uruguay in their opening match of this World Cup.

The result means that England no longer have any chance of making it past the group stage, no matter how they play in their final Group D match against Costa Rica. Los Ticos are assured of at least second in the group. Italy and Uruguay will battle it out to be the second team to progress.

The late matches on Friday feature two Group E clashes. Both France and Switzerland have the chance to qualify for the knock-out round when they meet in the earlier game. Ecuador and Honduras battle to stay alive in the late match. 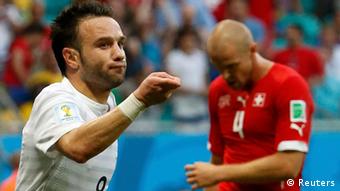 Switzerland-France was a very one-sided affair

In Group E, Switzerland versus France promised a close encounter, but delivered quite the opposite.

Swiss central defender Steven von Bergen picked up a nasty, bleeding facial injury early in the match and had to be replaced by Philippe Senderos. This may have helped unsettle Ottmar Hitzfeld's side, as France swiftly ran away with the match.

Olivier Giroud rose highest to head home France's 100th World Cup goal. Seconds after the restart, a Valon Behrami blunder set the French back into attack. Karim Benzema accepted the gift and played in Blaise Matuidi down the left, the winger beat Wolfsburg's Diego Benaglio at his near post to double France's lead.

Benaglio made some amends by saving a penalty later in the half, but France would find a third. Giroud will go down as the creator, locating Mathieu Valbuena at the far post. The pass from Raphael Varane, releasing Giroud down the left and turning defense into attack, set the third French goal in motion.

Switzerland fell five goals behind in the second half, as Benzema and Moussa Sissoko got in on the action for les Bleus. Yet the Swiss at least rallied for a final score of 5-2 courtesy of late consolation goals from Blerim Dzemaili and Granit Xhaka.

After a 5-2 win that was more lopsided than the scoreline implies, France appear to be much better than most pundits thought. What's more, the squad finally seems to have gotten over the retirement of its biggest star. (20.06.2014)

After England's 2-1 defeat to Uruguay, Jonathan Harding takes a stark look at the performance, the team and how similar this campaign feels to previous disappointments. (20.06.2014)

Day 9: Italy with England's fate in their hands; Group E to have an outright leader?

The drama of the World Cup continues and Day 9 could see another country's challenge come to an end. Meanwhile France and Switzerland are battling for top spot in Group E. (20.06.2014)