The Ultimate Fighting Championship is set to resume its calendar despite the ongoing coronavirus pandemic. The mixed martial arts promotion is ready to start “pumping out fights” again, according to President Dana White. 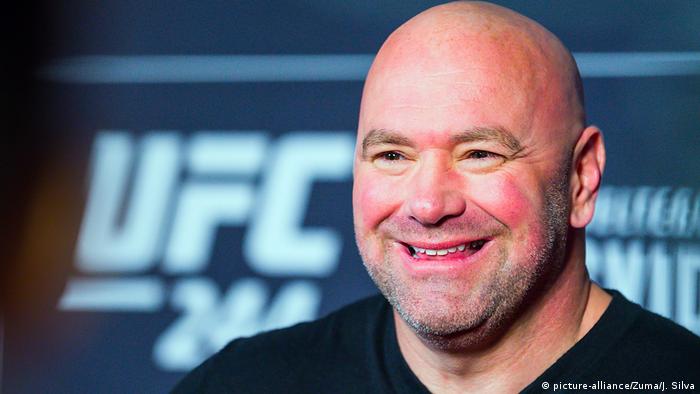 As one of the last major sports organizations to host an event in the midst of the coronavirus pandemic, the Ultimate Fighting Championship looks set to be one of the first to resume its calendar: UFC 249 is on.

The coronavirus has infected over 1 million people globally and brought the sports world to a standstill. Nevertheless, the mixed martial arts promotion is ready to push ahead with plans to put on events without fans in attendance. According to President Dana White, "as of April 18, the UFC is back up and running."

The first behind-closed-doors event in UFC history took place in Brasilia, Brazil on March 14, with White referencing talks with US President Donald Trump when asked about his decision to go ahead with the fight card.

"I talked to the president and the vice president of the United States about this," White told ESPN, the UFC's broadcast partner. "They're taking this very serious. They're saying, ‘Be cautious, be careful, but live your life and stop panicking.'”

Despite attempts to come up with creative solutions such as using the UFC's Apex Facility, the promotion has since had to conform to the variety of restrictions imposed on travel and large gatherings worldwide, postponing three events.

However, the grind "to figure out how we can keep the sport safe and how we can continue to put on events” never stopped for White, who was candidly optimistic in the face of adversity as he insisted UFC 249 would go ahead. Now he looks set to come good on his promise at an undisclosed location.

"I have this venue for two months, and I'm setting up shop here," White told ESPN. "We're going to be pumping out fights every week."

Multiple reports suggest the UFC is looking to host the events on tribal land in Central California not overseen by the state's athletic commission, in a bid to circumvent widespread sanctions in place because of the ongoing pandemic.

When it comes to fights cards using his stable of international fighters, including six of the 10 current division champions, White is thinking even further outside the box. "I'm also a day or two away from securing a private island," he told TMZ Sports.

The battle between risk and reward

The UFC's announcement has drawn both concern and criticism. The Association of Ringside Physicians do not have the authority to prevent the UFC putting on the event, but are the medical voice in the MMA and they released a statement on Tuesday that called for all combat sports to be suspended.

"Any combat sport taking place during this global pandemic places the athletes, officials, and anyone else involved in the event under unnecessary risk of infection and transmission of Covid-19,” the statement read.

Back in March and with Trump's words on his side, White was isolated in his perception of the pandemic among sports' power brokers and his recent announcement hasn't changed that.

"It's unbelievable,” boxing promoter Eddie Hearn told English newspaper Express. "I'd like to think that in boxing, there's no-one more roll your sleeves up and get on with it than me, but even I wouldn't consider staging an event right now. I'm not even thinking about options, not even on the radar.”

As someone with a determined mindset, White has brushed off criticism and pulled out all the stops to get his show back on the road, starting with the new-look UFC 249 fight card.

With lightweight champion Khabib Nurmagamedov unable to leave Russia amid the pandemic, fourth-ranked Justin Gaethje will face Tony Ferguson for the interim title as the main event on what the UFC president is calling the "baddest” fight card the promotion has seen.

White was also quick to offer assurances that fighters will be regularly tested for coronavirus and there will be no fans at the events. "We're going to make sure that athletes, referees, my production people, that everybody there is going to be healthy before, during and after the fights," he told ESPN.

With so many of his fighters' livelihoods on the line in the midst of the coronavirus pandemic, White believes the risks have been outweighed by the reward of affording the UFC's male and female stars a chance to provide for their families.

Other sports organizations don't necessarily have the luxury of a monopoly on their own market the same way the UFC does, but if UFC 249 is safe and successful, they may be tempted to follow suit.