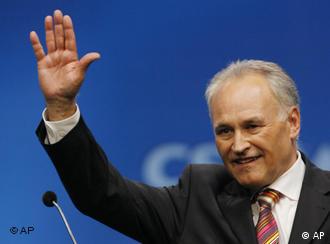 Huber, 61, said he would strive to maintain continuity with Stoiber, the party's leader since 1999, saying stability and reliability would
help the party to succeed.

"The CSU is an independent political force and we will keep it that way in our partnership with the CDU. They must know they need a strong CSU to rule," Huber, a Stoiber loyalist told party members before the vote, adding that he saw no need for radical change. 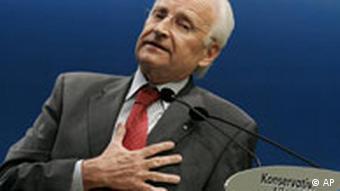 Huber will enjoy considerable clout with Merkel and there is speculation that may take up a cabinet job, leading to a shake-up in Merkel's cabinet.

The CSU has ruled Bavaria, Germany's biggest and most prosperous state, by an absolute majority for more than 45 years.

The state is an economic powerhouse, home to a slew of high-tech firms and national corporate giants Siemens and BMW and jobless levels way beyond the national average. The state's economy is bigger than 21 of the EU's 27 member nations.

Huber, known to be competent but uncharismatic, beat challenges from German Consumer Affairs Minister Horst Seehofer, whose popularity was dented among conservative CSU members after his mistress gave birth to his child earlier this year. 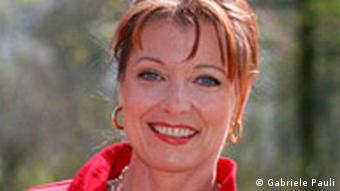 His other rival was Gabriele Pauli, a glamorous rebel seen to challenge the conservative, male-dominated old guard in the party. Pauli, who posed on her Web site in leather motorbike gear and has attracted major media coverage, recently created another stir by proposing that marriages should last just seven years.

She alleged earlier this year that Stoiber's office was snooping into her private life, costing the long time premier his job after 14 years at the top.

Mosques must not overshadow churches

In his farewell speech on Friday, Sept. 28, Stoiber underscored his vision of a successful society built on Christian values, defended a traditional approach to family and marriage and urged Bavarians to be proud of their state.

reward mothers who stay at home to raise their children.

"How can you describe that as an education policy disaster?" he demanded.

He also won huge applause for saying mosques were getting too big.

"When the mosques in our cities are bigger than cathedrals and churches, then we must tell our Muslim fellow citizens: 'No, that is going too far,' he said. 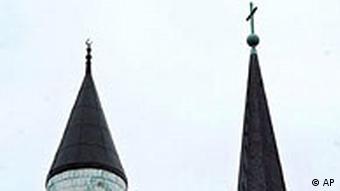 "Church towers, not minarets, should be what you see when you look out across the state," the 66-year-old said. Germany has the second-largest Muslim population in western Europe.

Stoiber is expected to head to Brussels next to take up a post with the European Union to reduce bureaucracy in the bloc.

Stoiber came close to becoming chancellor in 2002 after winning the conservatives' nomination over Merkel.

During the 2005 elections, he pledged his support for Merkel but took aim at her several times during the campaign and continued to be a thorn in her side after she moved into the chancellery.

Political commentators say Stoiber triggered his own political demise by accepting the post of economics minister in Merkel's government in 2005, only to pull out at the last minute and opt to remain in Bavaria.

What do you think of Bavaria and its politics? Please include your name and country in your reply.