Compensation Hope for Holocaust Slave Laborers | News and current affairs from Germany and around the world | DW | 29.03.2004

Almost six decades after the end of World War II, former slave-laborers who worked for the notorious chemical giant, IG Farben, could finally be granted the compensation they have long been waiting for. 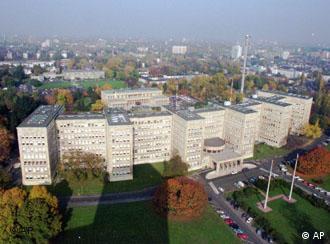 The former IG-Farben building in Frankfurt

The call for compensation payments from the now insolvent chemical manufacturer took wing when the 'IG Farben Foundation' was established with the express aim of processing continued claims. But with little money to play with, the foundation has now announced plans to try and secure a fund from the UBS Swiss bank, which acquired a former Swiss subsidiary of IG Farben after the end of the war.

IG Farben, which was linked to the manufacture of the Zyklon-B poison used in the gas chambers of Nazi concentration camps, filled its chemical factories with tens of thousands of slave laborers during the war. The foundation wants to go some way to righting the wrongs of the company's dark past.

"The IG Farben Foundation recognises that IG Farben continues to carry the weight of the guilt born out of its unreserved cooperation with the National Socialist regime, and the exploitation of forced laborers during World War II," reads the foundation's mission statement.

One of the founding members of the trust is the Christian Democrat parliamentarian Otto Bernhardt. He worked as chief liquidator on the dissolution of IG Farben until it was declared insolvent in November last year, and is keen to see the remains, both financial and educational help the right people.

"The trust has a very valuable archive. Not valuable in material terms, but in the sense that there are masses of documents which have to be processed, and there have already been numerous requests from under-graduates and post-graduates who want access to these documents," said Bernhardt. "And as a foundation, we are naturally willing to grant them this access. The second and central point which we have stated repeatedly, is that if we succeed in getting money for the foundation, the majority of it should go to the victims"

Ernst Ludwig Ehrlich, an expert on Judaism and an advisor to the foundation, says the foundation plans to be very careful about where the compensation money ends up.

"It is not a matter of just giving a sum of money to 'company X' in Kiev, we have found possible ways of handing it to people directly, particularly in fairly remote places," said Ehrlich, who fled from the Nazis.

Another of the foundation's advisors is the former German interior minister, Gerhard Baum. The FDP politician has worked as an advisor to the Russian forced laborer foundation for more than ten years, and is determined that any forthcoming fund go to those who deserve it. "Although I don't perceive this to be a danger, I will say as a preventative measure, that the trust must not be allowed to serve as a vehicle for securing the interests of the shareholders," said Baum.

Former IG Farben shareholders are already engaged in a lawsuit with the UBS bank, claiming their share of billions of dollars worth of assets they link to the company.

IG Farben's lawyers, including Matthias Druba, are optimistic that the insolvent company's capital will be used to a good end.

"The death and final dissolution of the company should go hand in hand with helping the victims, both victims of the Holocaust in general and more specifically, the victims of IG Farben," says Druba.

The next step is the creation of a board of trustees and negotiations with the Swiss bank. But these things take time, and the longer the wait, the fewer the victims who stand to benefit from what is rightfully theirs.