Community is not dead in America

Economic pressures have exacerbated the trend toward individualism in the US, says Robert Bellah, one of the most influential sociologists of American society. Still, the US is less divided than is commonly assumed. 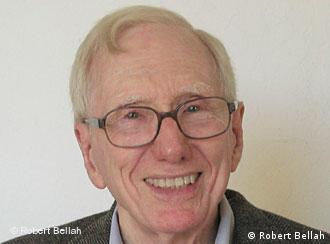 Robert N. Bellah is Emeritus Professor of Sociology at the University of California at Berkeley and considered one of the leading living sociologists. He is most famous for co-authoring the bestseller "Habits of the Heart" about individualism and community in American society and for his work on American Civil Religion. His new book "Religion in Human Evolution: From the Paleolithic to the Axial Age" will be published in September by Harvard University Press.

Robert Bellah: Many people who still teach Habits of the Heart tell me that it is if anything more true today than it was when it was published in 1985. Now remember that the argument of Habits is relative.

America is still a society in which voluntary associations are very active and community is by no means dead. Individualism has been part of our culture from the beginning. It is kind of the default mode when everything else is in trouble radical individualism is always there just below the surface.

Would you argue than that this trend toward individualism has been exacerbated and has gotten stronger in the last 20 years?

The intensification is linked to the growth of neoliberal economics and a change of the economy in America. Long-term employment is much less common now than. People are on their own. This is exemplified by the phrases "Be your own brand" and "You have to sell yourself" and that makes competition very very strong. And it reaches into the school system. Competition to get into college is much worse than when I was growing up. This is true in many advanced countries. It is terrible in Japan.

But let me now say some of the positive things about individualism. In the midst of the weakening of connections, growing divorce rates and what Robert Wuthnow, a leading sociologist of religion calls loose connections, the other positive side of individualism is that we have had a great increase in acceptance of people who were formerly excluded.

As you may know anti-semitism in America was as great as in Germany up to the time of Hitler. In the early 20th century Jews were excluded from all kinds of life. That's completely collapsed and anti-semitism virtually doesn't exist in this society. There are very few things from which Jews are excluded. The Civil Rights movement changed attitudes toward blacks.

More and more Americans think that if there are a lot of poor people in the black community, it's because they don't have adequate opportunity and they don't have good schools and not because they are inferior biologically. That's a statistically important change in view. We have had a tremendous move in the direction that women should be equal to men in politics, economics and even in the family.

And what's interesting is that these changes toward greater acceptance of people who were once excluded are happening in every group, in conservative groups as well as in liberal groups. And most surprising of all since 1990 we have seen a dramatic change in the acceptance of homosexuality as a natural form of being human. Just a month or so ago a Gallup poll showed on a national sample for the first time 52 percent of people approve of gay marriage. In 1990 maybe 17 percent did. So who can oppose these things? They are linked to the sense that every individual whether they are Jewish or black or whatever there gender or sexual orientation is should be treated equally.

At the same time in the same period when these rather inclusive views have grown stronger America has undergone a dramatic polarization of income. People in the top one or two percent have gotten stratospherically richer, people on the bottom have gotten poorer and the middle class has gone nowhere for 20 or 30 years. In previous periods in American history a change like this would have awakened social movements that would call for higher taxes and for changes that would help poor people.

The reaction to this dramatic polarization of income which has taken us back to the 1920s if not the 1890s has been silence. The left has not mobilized on it. Most people just think that's normal. Rich people get rich because they work harder and this kind of individualism. It affects elections because rich people put much more money into politics and it creates this illusion that America is a deeply divided society.

The fact is that the top 10 percent of the people are quite conservative and sometimes very zealously so and it's linked to some kind of intense evangelical religion. And the bottom 10 percent are more secular and more liberal, but the middle 80 percent is not polarized and pretty much agrees on most things.

And yet our politics which you can see in this insane business about raising our debt limit looks like the whole country is polarized. I think the extremes are polarized, but about 80 percent of the people don't disagree with each other. This is a complicated country. It's not that polarized. It's just that the people on the extreme right wing have a great deal of money and organization and they can get their way through the use of mass media and a high level of voting. But the country isn't really that divided and it's not really that happy with the fight in Washington.

In Habits of the Heart you interviewed numerous Middle Class Americans about their social connections, faith, values, and aspirations and thus painted a picture of mainstream America. How would you describe Middle Class America today compared to 26 years ago and why hasn't it reacted to this trend of stagnation?

Partly it does have to do with this decline of community. A neoliberal economy makes people very anxious and competitive and looking out for themselves. And even though they feel that they aren't treated fairly they rather than organizing together to change things in a more moderate direction and put some limits on income polarization they have been caught up in the struggle for survival. Politically they are moderate. We have an increase of what are called independent voters that won't identify themselves as Republicans or Democrats and these people change their votes and they elected Obama in 2008 because they went heavily for Obama.

The Middle Class has moderate views, but it's unable to organize effectively to have the impact on American politics that it traditionally did. So in terms of values I think the Middle Class is still representative and not the polarized extreme. But it's fractioned, less organized and more effected by what's happened in the economy in the last 30 years and that leads to incoherence rather than strong organization.

Are you worried than that these economic factors and pressures could ultimately undermine or even destroy social structures on a large scale?

Yes, the effort of these extreme Republicans is to destroy the last remnants of the welfare state, to get rid of Medicare and Social Security. Nonetheless the trend on public opinion on most issues has been on a more moderate and even liberal direction and this is particularly true of young people. And it's true of Latinos and as you may know the Latino population is growing very fast. And the Latino population although it remains more loyally Catholic than native born Americans politically is on the left.

So I think the mood of Republican conservatism demographically is in decline. So there is some hope that we may pull ourselves together and come back from this extreme neoliberal effort to destroy all the structures of the welfare state. A very small number of people want to get rid of Social Security and Medicare. That's an extremist view that's pushed by an intense amount of money and by the Republican Party which has been taken over by extremists.

But I am moderately optimistic that the trends in this society are in the other direction. The very fact that a black man could be elected president of the United States tells you that this not such a reactionary country. That would never have happened 20 years ago. So several things are going on in this country, some are bad and some are good. You have to keep in mind the complexity of the situation.

Do you see the same phenomenon, this trend toward individualism, also in Europe?

Yes. I think the same thing is true everywhere, because the pressure of neoliberal economics has certainly been great in Europe and in England. On the other hand you do have traditional communities that the United States doesn't have because we never were a traditional country. And the other thing is that Americans hate government. Europeans realize government has a few good things to do, so it's a little harder to make the government itself per se a demon. And I think although the welfare state has been weakened in Europe, it's not as in much danger as here.