The Colombian government and FARC guerrillas say they plan to form a truth commission to investigate atrocities committed during the country's five-decade civil war. The agreement comes despite heightened tensions. 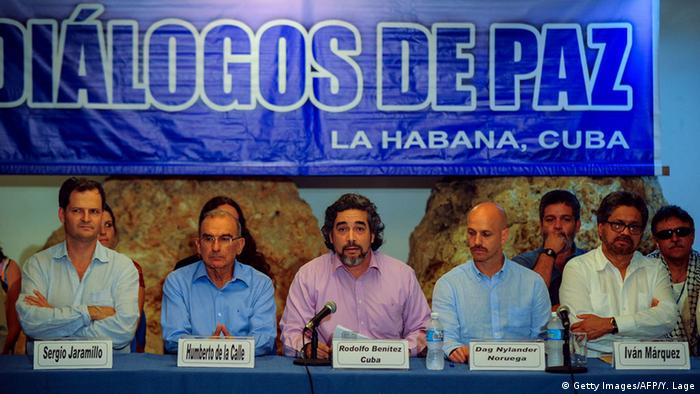 The two sides agreed on Thursday to set up the "independent and impartial" body as soon as a final peace deal is reached.

"The government will commit to…the clarification of the truth on everything that has taken place during the conflict, including the most serious human rights violations and infractions of international humanitarian law," said a joint statement released at the close of the latest round of peace talks in the Cuban capital Havana.

Officials from Cuba and Norway are sponsoring the peace negotiations, which have been underway in Havana since November 2012. The talks have previously led to tentative agreements on land reform and compensation, political participation, drug policy and landmine removal. About one year ago, the two sides began to focus on the victims of the civil war.

Thursday's agreement said that the Commission for the Clarification of the Truth would go some way to "recognize the victims and the responsibility of those who participated directly or indirectly in the conflict." However, it won't have the power to punish perpetrators, and the information it brings to light cannot be used in court.

Eleven commissioners, appointed by both parties, will have three years to complete the body's task.

The agreement marks a step forward in the peace talks, which resumed a week ago despite a recent surge in violence in the South American country. At least 40 rebel fighters have been killed in government bombing raids over the past two weeks, prompting FARC to abandon a unilateral ceasefire it had declared in December.

The Marxist guerillas have repeatedly called for a bilateral ceasefire, but Colombia's President Juan Manuel Santos has said he won't end military action until a final peace deal has been reached.

His government suspended airstrikes against the rebels in March, in recognition of the ceasefire, but later reversed that decision following a FARC attack on its soldiers.