For more than a decade, Monika Hauser's work to rehabilitate victims of wartime sexual abuse has earned her a raft of awards. Now, she’s won something bigger -- the Right Livelihood Award, or Alternative Nobel Prize. 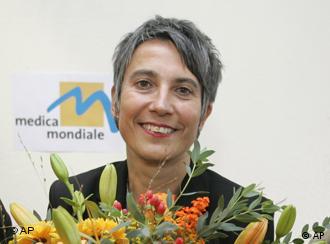 Back in 1992, Monika Hauser read newspaper accounts of rape committed on a mass scale in Bosnia. Rape had become a war tactic, and that thought sickened her.

"I was angry too that the press was reporting on it so graphically -- through-the-keyhole sorts of accounts," she said. "They couldn’t get enough. I thought, these women were being used twice, so to speak, and I said to myself I’d like to do something about it.”

The Swiss-born gynaecologist knew from her own practice in Cologne that rape victims needed support and care, not just publicity, and so in 1993 she left for Bosnia. Hauser, along with 20 local women, set up a trauma therapy center for rape victims in the Bosnian city of Zenica.

The project was a success, and Hauser quickly gained fame in Germany for her humanitarian efforts.

German public television network ARD’s news department awarded her its ‘Woman of the Year’ prize in 1993. The Social Democratic Party honored her with a similar prize a year later. 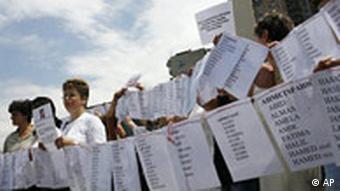 Bosnian Muslim women, victims of wartime rape, protesting outside the UN in Sarajevo earlier this year

The accolades were helpful in raising publicity and funds for the clinic in Zenica, and for the women’s foundation Hauser founded, Medica Mondiale.

Since then Hauser’s foundation has helped women in Kosovo, Albania, Afghanistan, Congo, Iraq and Uganda.

But despite the laurels, Hauser said, in the past decade politicians from Germany and other EU countries have not really shown an increased interest in helping female victims of war crimes.

A particular problem, she said, is that even as European troops participate in peacekeeping missions abroad, in part to protect women from crimes like rape, many of the soldiers themselves visit local brothels.

The military leadership seems unbothered by the fact that many of these establishments frequented by the troops employ women who are underage or are working against their will.

The double standard is frustrating, Hauser said, adding she'd learned to live with it.

"You’ve got to have a high frustration threshold when you’re involved in feminist projects," she said.

In an interview with Deutsche Welle, Hauser expressed surprise at winning the Alternative Nobel Wednesday, saying she would “accept it happily.”

In the past, Hauser has been choosy about accepting prizes. In 1996, the German government wanted to award her its highest honor, the Federal Cross of Merit (Bundesverdienstkreuz), but Hauser turned them down. She was unhappy that the state had threatened to deport thousands of Bosnian refugees living in Germany.

The Alternative Nobel, however, she said, “is really about recognizing social alternatives and honoring movements that have made an impact in changing the world.”

She added that “it’s a big honor” to be thought of in that way.

The award isn't just a honor but also comes with a $50,000-euro purse. Hauser said she would split the money between her first project, the Women’s Therapy Center in Zenica, Bosnia, and her latest one, in the eastern part of the Democratic Republic of Congo.

There, Medica Mondiale works to train women recruited by the local group PAIS to care for and counsel victims of rape.

A jury has named winners from Germany, India, Somalia and the United States as recipients of the 2008 Right Livelihood Awards, often called the Alternative Nobel Prize. (01.10.2008)