Cologne Gets a Lock on Love

Bored of sending flowers and chocolates on Valentine’s day? How about saying it with a padlock? "Love locks" may have gotten their start in Italy, but the tokens are now all the rage in one German city, at least. 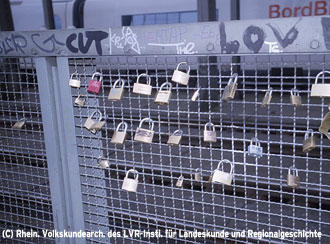 Rome is, without a doubt, a perfect place for romance. There, on the famous Milvian bridge over the Tiber, is where it all began -- the hanging of lucchetti d'amore, or love locks. Young lovers still flock to the bridge today to immortalize their love with an engraved padlock, throwing the key into the swirling waters below.

Cut to the German city of Cologne. Unlike Rome or Paris, it's not exactly known as a romantic destination. Despite this, love locks are currently all the rage, with over 300 of them clinging to the busy Hohenzollern bridge over the Rhine. The locks began appearing on the pedestrian footpath across the bridge last summer. One of them belongs to Steffi and her boyfriend, Andreas.

"We took a walk over this bridge, and suddenly he said, 'I promised you a gift to show you that my heart is always with you even when I am 350 kilometers away.' And he took the lock out of his pocket and showed it to me," Steffi remembers. "I had tears in my eyes because I think it's so lovely."

Steffi's boyfriend lives and works more than three hours away in the town of Bad Sachser. The lock was his way of showing his commitment to her. Engraved in italic script, it reads: "Brought together by fate, joined forever in our hearts." 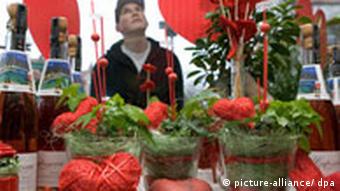 It doesn't have to be just red hearts and ribbons

For Steffi, tending to the lock keeps Andreas close, at least in her mind.

"I come here two or three times a week to clean the lock," she says. "Because of the rain and the weather on this bridge, it gets a little dirty, so I clean it up."

She is not the only one drawn to the bridge because of a padlock. The tokens have also become an attraction for tourists, who stop to take a closer look at the messages inscribed on them.

Each inscription is different. Some are just initials written in marker pen, others have been more expensively engraved. And the lucchetti are not just for couples -- close friends are also making use of these symbols of affection. 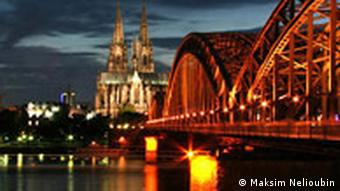 For Steffi, the bridge has special significance

But is it a fleeting trend, or a sign of something more meaningful? Dagmar Haenel, head of the folklore department at the Rhineland Regional Council, has begun a research project to get to the bottom of the phenomenon.

"We want to document this, because for Cologne, it's a very new custom," she said. "The beginning of a new tradition is very interesting for us."

Haenel says that bridges have always been symbolic places for lovers. Just like a relationship, they connect two parts. This would explain why love locks have been spotted on bridges all around the world, from Italy to Latvia, and even as far afield as China.

For Steffi, the Hohenzollern bridge is an especially significant location for her love lock.

"When I travel to see Andreas by train, I have to cross this bridge, so it's a connection between me and him," she said.

Steffi and Andreas have been dating for just four months. So while their connection might be quite new, their love lock has already braved wind, rain, sleet and snow -- and a threat by the German railway company, Deutsche Bahn. It's responsible for the bridge, and not long ago, the company threatened to have the locks sawn off.

That prompted such an outcry, though, that the company was forced to undergo -- what else -- a change of heart.

Love can make people do the craziest things but few people would go to the lengths a 36-year old German banker recently went to in an attempt to capture the heart of his dream woman. (30.09.2008)

Nerds Get Training in Seduction 2.0

While your average techies can reformat a hard drive in a snap, in the romance department, they often don't know a mother board from a mouse. A new course for IT engineers aims to change all that. (10.01.2009)

Searching Online for That (Religious) Special Someone

Nowhere in Europe are religious matchmaking Web sites flourishing as much as in Germany, where people are increasingly turning to the Internet for romance. Most, but not all, of the sites are aimed at Christians. (29.11.2008)