Eight of Germany's most recognized coffee companies have been fined a total of 30 million euros for price-fixing. The country's competition regulator said the companies coordinated prices for ten years. 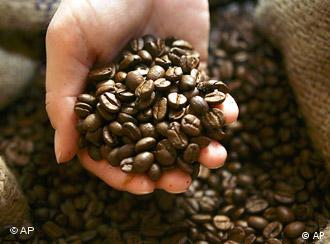 Germany's Federal Cartel Office announced on Wednesday that it was fining eight German coffee companies or their local subsidiaries a total of 30 million euros ($35.9 million) for illegally fixing the price of wholesale coffee sold to bulk customers such as restaurants, hotels and automatic coffee machine companies.

The authorities say the heads of Tchibo, Darboven, Melitta, Kraft Foods, Seeberger, Westhoff, Lavazza and Segafredo Zanetti met from 1997 through mid-2008 to agree on price increases or cuts.

"Coordinated price increases for consumer goods such as coffee have a direct impact on consumers' wallets," said Andreas Mundt, head of the competition office.

"Cartels appear in all kinds of industries. They are highly damaging to society and therefore have to be rigorously prosecuted."

In addition to the eight companies, the German Coffee Association and ten of its employees were also fined up to 90,000 euros. Melitta and Darboven had their fines reduced for cooperation, while the Munich-based Dallmayr sidestepped a fine altogether for voluntarily reporting its role in the price-fixing to the authorities.

In December, Tchibo, Melitta and the Munich-based Dallmayr were already fined for the price-fixing of coffee products for the retail sector.

Coffee roasters have colluded to make Germans pay more for their coffee than they should have. Three companies now face huge fines for price fixing, with more investigations underway. (21.12.2009)

The German Federal Cartel Authority may have to pay back millions of euros to major companies after a state court ruled it has been setting fines too high for the past three years. (24.02.2010)

Raids on retailers for price-fixing

In an alleged price-fixing scandal, German authorities have raided several of the country's largest retail chains. Consumer groups are calling for millions of euros in compensation. (14.01.2010)

UK Prime Minister Boris Johnson has announced a new 4-week stay-at-home order for England will come into effect next week. He bowed to pressure from scientists to arrest soaring rates of coronavirus infections.

Police in the French city of Lyon say a Greek Orthodox priest has been critically injured in a shooting. The country remains on high alert after two deadly knife attacks over the past two weeks.