Climate change fuels wildfires around the world | Environment| All topics from climate change to conservation | DW | 14.01.2013

Every year, large areas of the Earth's surface burn, and the number of fires is increasing. Is climate change fanning the flames? Or are the fires making climate change worse? 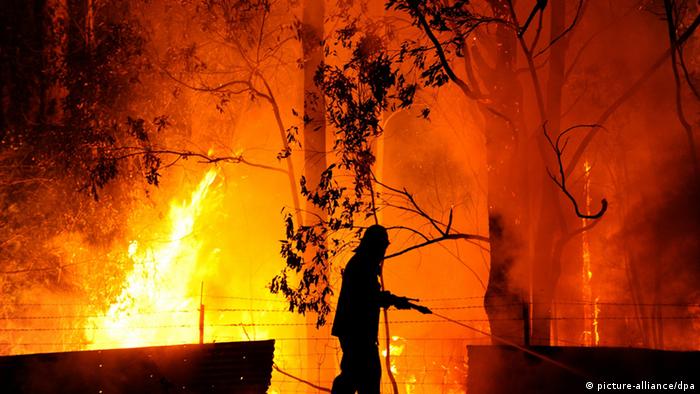 The climate is complex. It is so complex that it's difficult for researchers to give accurate climate forecasts because it is so heavily influenced by external factors – solar radiation, greenhouse gasses and oceans. Another factor, which has been largely ignored until now, is fire. Only recently have experts realized that large forest and bush fires are noticeably changing the climate while being affected by it.

"Every year, more than 400 million acres (160 million hectares) are burnt. That's an area bigger than the size of India," says Silvia Kloster from the Max Plank Institute for Meteorology in Hamburg.

Lightning often ignites wood, destroying entire forests. People play a role too by extinguishing the fires and controlling or preventing fires on land. In addition, some also burn forests to gain agricultural land. 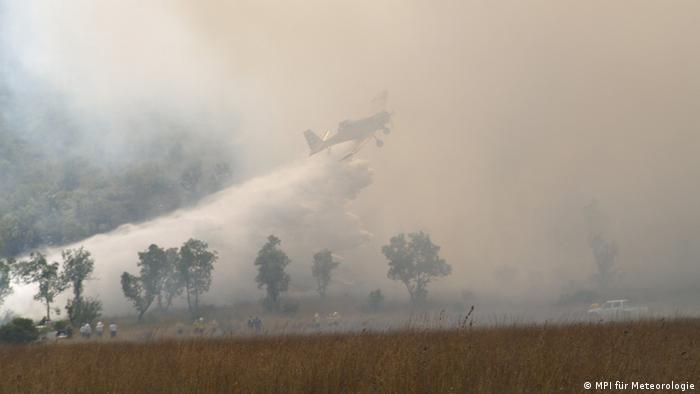 Two years ago, climate scientists were able to see the impact of a manmade bush fire close-up in South Africa. Local authorities deliberately set the vegetation on fire in a national park to ensure that undergrowth in the Savannah did not become too dense. Helicopters dropped table-tennis sized balls filled with alcohol glycerol to set the grass alight.

"I stood right in the middle of it," Kloster says, adding that the fire spread very quickly.

The fire department had the situation under control, but the experience has stayed with her.

"I just smelled like smoke. Everything I had with me had to be washed more than once," she notes.

Fire maybe an occupational hazard for most, but it is Kloster's specialization. She wants to find out the impact that fire has on the climate and vice versa. Since the mid 19th Century, as more land was cleared for farming and cities were built, fewer fires have raged across the continents. But things changed.

"Our simulations show that 1960 was the tipping point," she explains. "Since then the area that burns up on the Earth has been expanding."

Does climate change increase the risk of fire?

Climate scientists are blaming the increase of fires on global warming, which has caused many places to become warmer and drier. Dry wood burns better than moist timber. In addition, the rising carbon dioxide levels in the air allow plants to grow better. As a result, the Earth has more biomass – more fuel for fires to burn. To find out whether this trend is set to continue and if climate change will lead to more fires on the planet in 25 years, Kloster and her fellow researchers are simulating scenarios on a computer.

"Globally, we see an increase," Kloster says. "In some of the simulations, the number of fires increased by 20 percent for 2040." 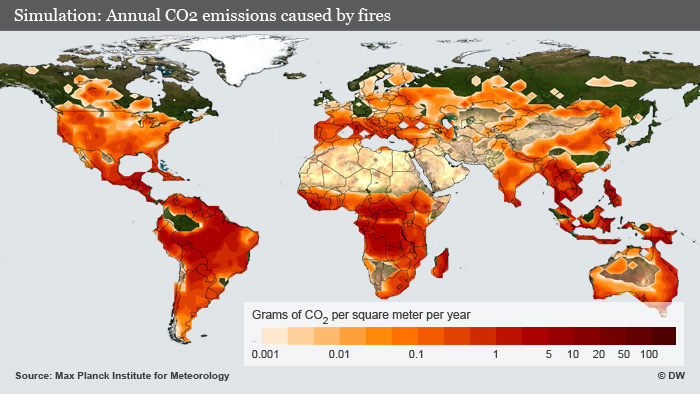 But there are significant differences.

"In some areas we see an increase, while in other regions however, a decrease is predicted," she explains.

The number of fires could increase in tropical forests. But Mediterranean regions will probably have less fires because of increasing drought, which will result in less vegetation.

It's not just the climate that affects fires, massive fires also affect the climate. The larger and more intense a fire is, the more carbon dioxide is released into the air – this usually temporal. Eventually, plants and trees, which bind the carbon dioxide, grow on the burnt land again.

"But there are many other factors," says Kloster. "Fires don't only release carbon dioxide, they also release many other gases."

Considerable amounts of methane, a more pollutant greenhouse gas than carbon dioxide is just one example. Add to that, the large amounts of ash that are released into the air. These jet-black particles absorb sunlight and through that are highly efficient in heating the planet's atmosphere.

But, it's tricky. Some particles that are released into the atmosphere by the fire, absorb the heat by acting as a cloud. These clouds cool the atmosphere by reflecting sunlight back into space. For Kloster, the question whether more fires will occur in future and whether they will hasten climate change or slow it down persists.

"This is the question our research is trying to answer," she says.

Australia firefighters in race against time

Firefighters in Australia have been working round-the-clock to bring a series of blazes under control ahead of a forecast temperature spike. At least 15 bush fires remain out of control in the state of New South Wales. (10.01.2013)

A study by a leading economic think tank has revealed that an increasing number of German companies are already feeling the impact of climate change. But the impact does by no means have to be negative. (09.01.2013)

Australian has been bracing for near-record temperatures, with bushfires ablaze in five out of six states. Police in Tasmania are still searching for those reported missing after fire swept across the island last week. (07.01.2013)