An eastern suburb of the Italian capital has been the scene of rising tensions between locals and refugees this week. Officials have now ordered the transfer of minors to a different center, citing security concerns. 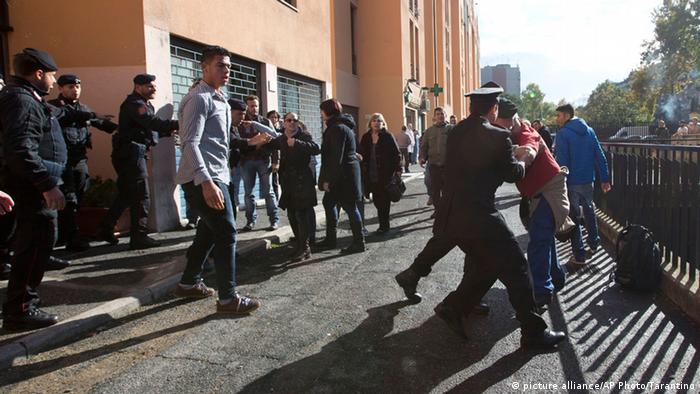 On Thursday, workers at a refugee center on the outskirts of Rome reported renewed tensions with local residents, who have been holding violent demonstrations against the foreigners in recent days.

"We are scared. We are trying to find a compromise with the residents," a center official, Francesco Amato, told the Associated Press news agency. The refugees currently being housed at the facility are reported to be primarily from Egypt and Bangladesh.

Amid the upswing in violence despite a heavy police presence, minors were evacuated from the site.

A statement from Rome Mayor Ignazio Marino's office indicated that the building in the eastern suburb of Tor Sapienza had been "seriously damaged," according to Reuters news agency.

Hostilities escalated on Monday, with protesters throwing stones and bottles at the center as they shouted insults at its residents.

"Rome rejects all forms of violence, racism and xenophobia," Marino said in the statement.

Conflicting reports have described the protesters in Tor Sapienza, on the one hand, as disgruntled Italian natives whose ire is directed at the government's insufficient support for the refugees and, on the other, as far-right xenophobes.

The southern European country has been fighting record unemployment and is still struggling to emerge from its worst economic recession since World War II.

Italy has seen a sharp rise in the number of refugees and asylum seekers in recent years as wars and political instability swept over the Middle East and North Africa. Many of those people have attempted to cross the Mediterranean, seeking to land in Italy. Rome recently ended its own sea rescue mission to allow the EU to head a new mission, dubbed "Triton."

According to the UN High Commissioner for Refugees, Italy will be home to nearly 80,000 refugees and close to 14,000 asylum seekers by January.