China's Premier Li believes that change in the world's second-largest economy is fraught with difficulties and uncertainty, but has reassured an international audience that China will not threaten global growth. 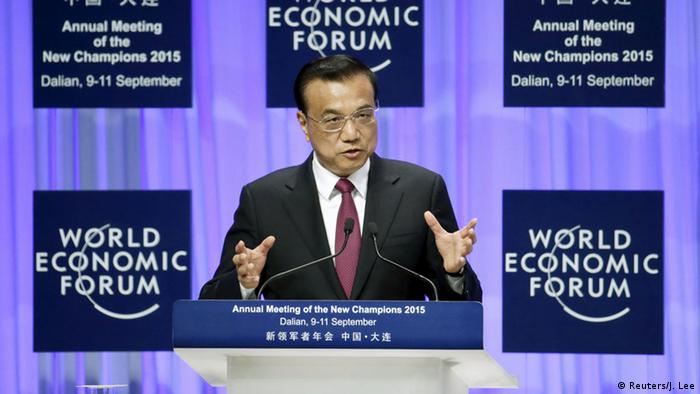 Speaking at a World Economic Forum meeting, currently being held in the Chinese city of Dalian, Li Keqiang said the transition of China's growth model from the emphasis on exports and investment a more sophisticated one based on consumer spending would be a "painful and treacherous process."

"So ups and downs in economic performance are hardly avoidable", he told an international audience of business leaders and policymakers, calling that "natural" during a time of change.

"China is not a source of risk for the world economy but a source of strength for global growth," Li said, stressing that it accounted for about 30 percent of world economic expansion in the first half of this year.

China's gross domestic product (GDP) reached 7.0 percent in the first two quarters this year, but on Monday the government lowered its 2014 growth reading to 7.3 percent, from the 7.4 percent announced in January.

Li acknowledged that the economy had "come under quite a number of difficulties and downward pressure" but stressed it remained in a "proper range," despite being affected by "economic troubles elsewhere."

"China is an economy that is closely integrated with the international market," he said, an added: "Given the weak growth of the global economy, China cannot stay unaffected and the deep-seated problems that have built up over the years are also being exposed."

Resorting to commonly used wording, Li said that policymakers would be unmoved in the face of short-term movements in the economy, but stand ready to take action as necessary.

"If there are signs the economy is sliding out of the proper range we have adequate capability to deal with the situation," he said. "The Chinese economy will not head for a hard landing."

China has set its annual target for economic expansion at about seven percent for this year, down from last year's objective of around 7.5 percent. Li stressed, however that given China's GDP now stands at more than $10 trillion (11 trillion euros), growth of seven percent represents a total that "is even bigger than the double-digit" figures of the past, and remains one of the highest in the world.

China's gross domestic product (GDP) grew slightly less strongly in 2014 than originally calculated, fuelling concerns that the world's second largest economy might be headed for a period of slower expansion. (07.09.2015)

It is very difficult to comprehend China's official economic data, but there are reliable indicators for evaluating the Chinese economy, says DW's Frank Sieren. (09.09.2015)