China Postpones Summit with EU over Dalai Lama | Europe | News and current affairs from around the continent | DW | 26.11.2008

China has decided not to send representatives to Europe next month to protest scheduled meetings between EU heads of state meeting and the Tibetan spiritual leader. Things are tense between Beijing and Brussels. 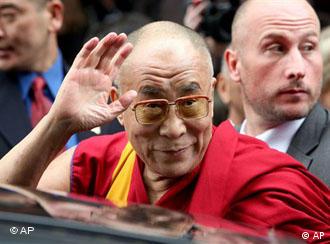 China's non-attendance at the summit was announced by the EU in a statement on Wednesday, Nov. 26.

"The Chinese authorities have informed the European Union of their decision to request the postponement of the 11th European Union-China summit, scheduled to take place on Dec. 1," the statement said.

"They said their decision was due to the fact that the Dalai Lama will at the same time undertake a new visit in several countries of the Union and will meet on this occasion heads of state and government."

The Tibetan spiritual leader will be visiting a number of EU countries in December. At one major event, he is scheduled to meet with French President Nicolas Sarkozy in Poland at ceremonies commemorating the 25th anniversary of Polish labor leader Lech Walesa being given the Nobel Peace Prize.

Beijing accuses the Dalai Lama of agitating for Tibetan independence from China. The spiritual leader says he seeks only "meaningful autonomy" for Tibet, which has been ruled by China since 1950.

The Dalai Lama has lived in exile since 1959.

Brussels said it was disappointed by Beijing's decision to postpone the summit.

"The European Union, which set ambitious aims for the 11th European Union-China summit, takes note and regrets this decision by China," the bloc said in its statement.

Economic and political ties between Germany and China have been on shaky ground since the Dalai Lama's visit to Germany last year. But now, with the German foreign minister in Beijing, things seemed to have improved. (13.06.2008)

Ignoring criticism from China and from members of her own party, Germany's development minister met with the Dalai Lama at a Berlin hotel on Monday, May 19. She called the talk "very good" and "fruitful." (19.05.2008)

Dalai Lama Speaks Out in Germany Amid Controversy

The Dalai Lama, who is in Germany for five days, called Sunday for religious tolerance as controversy simmers in Berlin over the planned meeting between the Buddhist leader and a member of Chancellor Merkel's cabinet. (18.05.2008)