Pope Leo III crowned the Frankish king, Charlemagne, Emperor of the Romans on Christmas Day, 800 in St. Peter's Basilica in Rome, making him the most powerful ruler of his time. 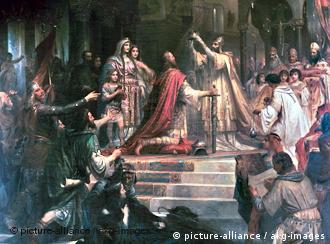 Painting by Friedrich Kaulbach of the coronation

In November 799, Charlemagne (ca. 747 - 814) set out for Rome. The pope had summoned him, because he could no longer fend off his enemies in the city. After Charlemagne calmed representatives from both sides and had Leo take an oath of purgation concerning charges of adultery and perjury brought against him, the two rulers attended a Christmas mass in St. Peter's. Those in attendance that Christmas Eve found themselves witness to a show of historical dimensions.

According to the court chronicler Einhart (ca. 780 - 840), Charlemagne was kneeling before the altar in prayer when Pope Leo III approached him from behind and placed the imperial crown on his head. Charlemagne's biographer was keen to convey the impression that the king was surprised by the coronation. It's probable that Charlemagne had speculated on the likelihood of receiving the crown; the pope was, after all, in need of the kind of assistance only the King of the Franks could offer. As soon as the crown was in position, the pope was on his knees, anointing the feet of the new emperor. At the same time, so the account goes, hefty applause broke out among the Romans in attendance, while the clergy began the coronation litany.

With this ceremony, the King of the Franks became a Roman Emperor, with a vast swath of Europe under his rule. The core of his new realm was formed by those countries which, around 1,150 years later, would make up the European Economic Community: France, Germany, the Benelux states and Italy. 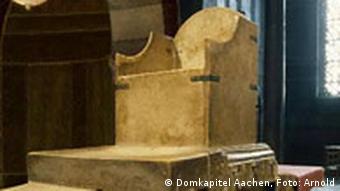 Charlemagne's throne in the Aachen cathedral

Immediately after the coronation, Charlemagne introduced a common currency, written language and measurements in Francia. In Aachen, he commissioned buildings, the remnants of which still provide an indication of how the city was meant to become a "second Rome."

Charlemagne was not just a great commander, Christian and modernizer of Europe, he was also a great supporter of education. He gathered the most significant scholars of his day, and commissioned them to create a standardized curriculum. With that, he laid the foundation for Frankish culture to flourish.

The "Carolingian renaissance" was closely linked with the British scholar, Alcuin of York (735 - 804), whom Charlemagne had met in Parma in 781. At Charlemagne's Palace School at Aachen, Alcuin established a library filled with important works by antique authors. Their writings were recorded in the script known as Carolingian minuscule, and archived. The architecture of the Carolingian era also harked back to antiquity. Aachen's Palatine Chapel, for example, was meant to call to mind the "little Hagia Sophia," the Sergios-Bakhos Church in Constantinople. Other government buildings in Aachen were copies of Roman buildings.

This "Carolingian renaissance" is of enormous significance, because it turned Francia into a link between ancient and medieval Europe. From that point on, the "medieval modern" was heavily influenced by the thoughts of the ancient scholars, by pre-Christian Roman architecture, or by religious ideas from Rome and Constantinople. 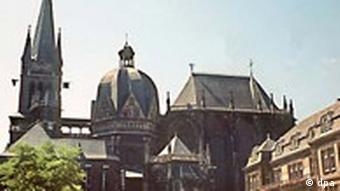 The Aachen cathedral with the Palatine chapel

And because Charlemagne sought to bind antiquity with the Middle Ages in this way, he also put himself on a level with those heroes of antiquity. The salvation of antiquity's cultural heritage was a conscious process, because the scholars started with the idea of a linear connection in both culture and politics. Since our own culture is built atop that which went before us, they mused, it only made sense to discover as much as possible about antiquity.

Charlemagne was also a believer in the theory of the "four empires" after which the end of the world was prophesied. When the pope bestowed the title of emperor on him, the Roman empire lived on in Charlemagne. This "translatio imperii" had (once again) prevented the world from coming to an end.

Given this political belief, it made sense to partly adopt Roman culture, architecture, law, literature and knowledge, thus keeping it alive. In this way, the wisdom of antiquity came to Europe. Everything that the modern world of today knows about antiquity, it knows because of how the Carolingian renaissance preserved this knowledge and kept it from being destroyed.