Chaos ahead of Egypt′s presidential elections | World | Breaking news and perspectives from around the globe | DW | 24.04.2012

Chaos ahead of Egypt's presidential elections

A month ahead of the vote, the situation remains unclear. After 10 candidates were blocked, tens of thousands, including the Muslim Brotherhood, protested against the ruling military council. 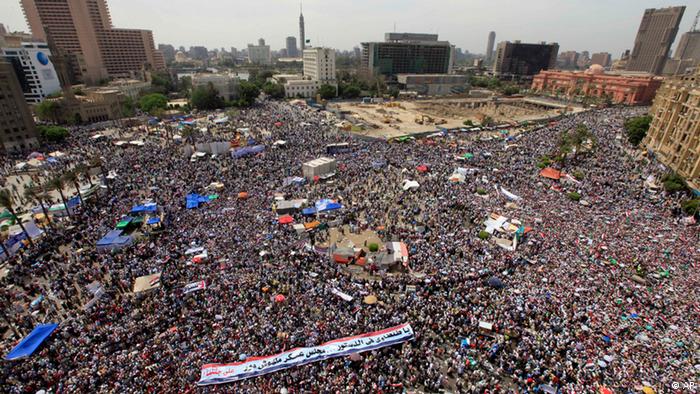 Since the Supreme Council of the Armed Forces (SCAF) began governing Egypt over a year ago, the military council seems to have turned most of the population against it. The revolutionary youth are angry because they see the same old elites still determining the country's future.

But older Egyptians are also dissatisfied. A recent survey shows a quiet majority of the population is looking for a new authoritarian figure as head of state - a response to months of chaos in the country.

Even the Salafists are upset - despite winning a surprising fifth of the votes during parliamentary elections - because their presidential candidate was denied. The Muslim Brotherhood long withheld criticism of the military council but now publicly expresses their dissatisfaction. Last Friday, members of the group stood for the first time in many months together with liberal and young protestors at Tahrir Square in Cairo to demand various political reforms. 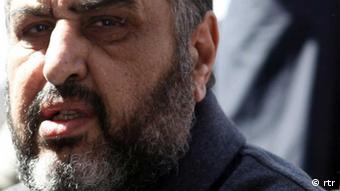 Originally, it was just liberal groups who called for Friday's demonstration. Their aim: no candidate from the era of former president Hosni Mubarak should make it into the country's highest office during presidential elections on May 23 and 24. The electoral commission has already disqualified 10 of 23 candidates, but the committee has allowed a number of politicians who held high offices under Mubarak to compete.

Those individuals include former secretary general of the Arab League, Amr Moussa, who also served as foreign minister for ten years under Mubarak, as well as former prime minister under Mubarak, Ahmed Shafik.

Salafists and Muslim Brotherhood members cited those disqualifications in their sudden decision to take part in protests against the military council.

"The fact that multiple candidates have been blocked ahead of the campaign has damaged the Islamist camp the most," said Annette Ranko, Egypt expert at the GIGA Institute of Middle East Studies in Hamburg.

Until recently, Abu Ismail and al-Shater were considered the most promising candidates. Now the Muslim Brotherhood backs replacement candidate Mohamed Morsy instead.

"That's a clever move by the Muslim Brotherhood," said Ranko. "Morsy is extremely conservative. So there's the possibility that Salafist voters could identify with him." 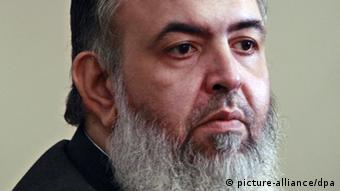 Salafist candidate Hazem Abu Ismail was disqualified on a technicality

Political scientist Hamadi El-Aouni of the Free University of Berlin sees the Brotherhood's play as evidence that the group is working together with the military council - at least in cases when it benefits them.

"The Muslim Brotherhood said: we will never name our own presidential candidate," said El-Aouni. "And now look, they actually have two or three. And they say: We are against the military council because the legitimacy must come from the people. But they do nothing that would really upset the military."

El-Aouni also offers a different take on their participation in recent protests.

"The Muslim Brotherhood thinks tactically and double crosses," said the Middle East expert who was born in Tunisia and has lived in Germany for 40 years.

"They decided at the last moment to take part in Friday's demonstrations because they wanted to keep Tahrir Square occupied. They wanted to prevent the Egyptian public from seeing how many people could potentially be mobilized against them, and through their participation, they made that impossible." 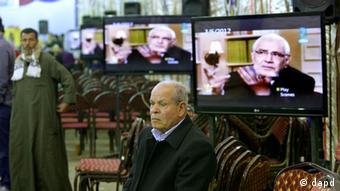 Abul Futuh, pictured on-screen, is now running as an independent

The Muslim Brotherhood also stands to benefit from its proximity to the Salafists.

"The Muslim Brotherhood needs the Salafists in order to sell themselves as moderates," said El-Aouni. "The Salafists serve as an alibi for them. That's why they only appear sporadically, when the group needs them."

It's also clear that both of the Islamist groups are getting support from Saudi Arabia, argues the political scientist: "On Friday, the Muslim Brotherhood hoisted the Saudi flag for the first time in public. Tahrir Square was full of them. That means that Saudi Arabia is acting as a power broker."

The Gulf state could be out to expand its influence in Egypt and help protect itself against a revolution, while Islamists in Egypt profit from the financial support from abroad.

Annette Ranko of the GIGA Institute considers two Islamists to be among the four most serious contenders for president: Mohamed Morsy and Abdel Moneim Abul Futuh, who used to be a member of the Muslim Brotherhood but is now campaigning independently. Ranko also sees good chances for former Mubarak associates Amr Moussa and Ahmed Shafik.

Hamadi El-Aouni has limited hopes for the presidential election: "Regardless of who wins, he will have no weight," he said. "That's why Egyptian intellectuals and constitutional scholars are talking more and more about the option of a presidential council. It could be four presidents, a chairman and three deputies who lead the country for perhaps a year - until there is a new constitution and then a new vote."

Egyptians rally to hold military council to its word

Cairo's Tahrir Square filled with thousands of Egyptians Friday, all protesting against the ruling military council - but for not all for the same reason. (20.04.2012)

The candidates that were barred from standing in the upcoming Egyptian elections have lost their appeals, marking another twist in the Egyptian presidency saga. (17.04.2012)