The government declared a 15 day state of emergency after rebels attempted to blockade the capital. The country's UN envoy has also urged for more peacekeepers to be deployed. 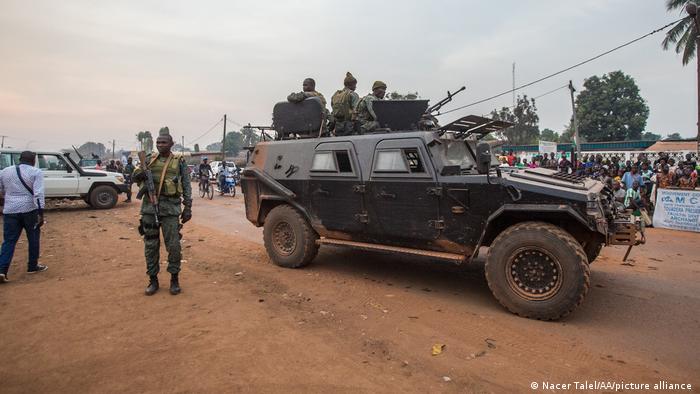 In this picture from January 4, CAR security forces take measures around the party headquarters of President Faustin Archange Touadera

The Central African Republic (CAR) declared a state of emergency on Thursday, amid bids by rebels to try to blockade the capital Bangui.

"The state of emergency has been proclaimed across the national territory for 15 days, starting from midnight (2300 GMT)," presidential spokesman Albert Yaloke Mokpeme said over national radio.

Mokpeme told AFP that the state of emergency would allow authorities "to make arrests without going through national prosecutors."

The announcement follows a surge in attacks by armed groups seeking to overturn the December 27 presidential election.

President Faustin Archange Touadera was declared the winner by the country's constitutional court on Monday. Only one third of eligible voters cast their ballots, primarily due to security concerns.

In light of the rising violence, the United Nations envoy to CAR urged the UN to deploy more peacekeepers.

The country "is at serious risk of a security and peacebuilding setback," envoy Mankeur Ndiaye said in an address to the UN Security Council.

Ndiaye said a substantial rise in the number of soldiers would help the mission on the ground, but did not mention how many more troops would be needed.

The CAR military is being backed by Rwandan, Russian and UN troops. Large numbers of CAR troops have deserted the military over insufficient training and resources, Ndiaye said.

Seven peacekeepers have been killed in the weeks-long surge of violence.

Rebel groups, which control large areas of CAR launched an offensive a week before the presidential election — blockading the capital and launching attacks on national highways.

Attacks on supply convoys have impacted supplies of food, medicine and resources for hospitals, said Vladimir Monteiro, spokesman for the UN's mission, known as MINUSCA.

The price of some basic commodities has risen by at least 50% in some areas as a result of the attacks.

The country has been rocked by violence since a rebellion in 2013 deposed former President Francois Bozize.

CAR prosecutors accuse Bozize of working with the rebels to plot a coup ahead of the elections, which Bozize denies.

Doctor’s Without Borders said one of its staff members was shot dead by a government soldier, and has called on the country’s armed forces to explain.