Catholic Church was 'inconsistent' with Mafia

The Catholic Church had to fend off accusations regarding ties to the Mafia for a long time, although many priests decried Mafia violence. Rossella Merlino talks to DW about organized crime and religion in Italy. 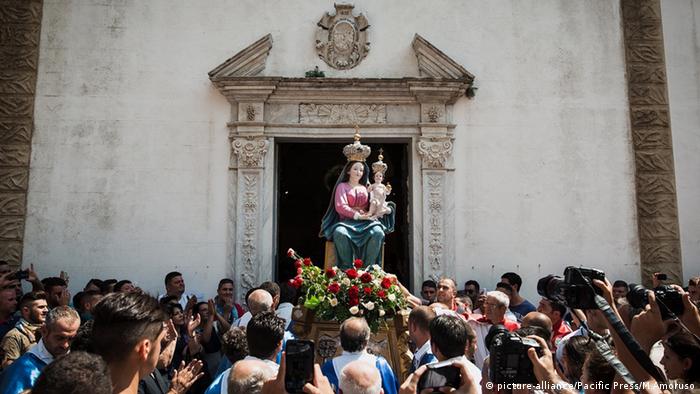 DW: There are many myths surrounding the Italian Mafia and their relationship with the Catholic Church. However, there are also credible reports that the Church has been turning a blind eye to organized crime for decades. How many of these stories are true?

The stand taken by representatives of the Catholic Church towards the Mafia phenomenon has been inconsistent over the years. Until the 1980s, the general position of the highest hierarchies of the Catholic Church had been of acquiescence towards, and even tolerance of, the Mafia. For example, in 1964, the Cardinal Archbishop of Palermo, Ernesto Ruffini, openly claimed that the Mafia was nothing more than an insignificant minority of criminals and a slander spread around by communists to dishonor Sicily. When asked to define the Mafia by a journalist, the archbishop even replied: "As far as I know, it is a brand of detergents." In general, with the exception of isolated figures in the clergy who took a clear position against organized crime, it was only after the deaths of anti-Mafia magistrates, politicians and police officers in the 1980s and 1990s that the Church would break its silence. In May 1993, Pope John Paul II denounced the Mafia, and in June 2014, Pope Francis excommunicated all Mafiosi.

Are there other ways in which the Church and the Mafia cooperate?

I would use the term "cooperation" with particular care, because it is very important to see how the position of the Catholic Church has changed over the years. It is true, however, that in the history of the Mafia there have been numerous cases of proximity to and even of involvement in Mafia activities on the part of the clergy. There has been involvement in the sense of priests who would go to the hideouts of the Mafiosi to celebrate mass, offering a form of personal and spiritual support. The prominent role that Mafiosi play in local religious festivals is another key example of the often ambiguous relationship between the mafias and the members of the clergy. As a result of the firmer stance taken by the Catholic Church against the Mafia in recent years, this practice has certainly reduced, although it has not entirely been discontinued.

Earlier, an Italian bishop said he returned a 10,000 euro ($10,900) donation for a damaged church, after finding out that the money came from the 'Ndrangheta clan, which controls the biggest share of Europe's cocaine trade. Is this behavior an exception?

Absolutely not. While the higher ecclesiastical hierarchies have taken a progressively clear position against the Mafia in the last two decades, some clergymen have opposed organized crime on the local level even before that. For example, there was the famous Sicilian priest Pino Puglisi, from a very Mafia-dense part of Palermo, who was killed in 1993. It was because he was clearly opposing the Mafia phenomenon, he was trying to get young people off the streets. One year later, the Neapolitan Camorra would kill Father Giuseppe Diana in Casal di Principe for his relentless anti-Mafia commitment.

Pope Francis has excommunicated mobsters in 2014 and seems to be heading a push to distance the Church from the Mafia. How serious is this push and what are its chances of success?

The Vatican moves away from Mafiosi

This is going to have an impact, without a doubt. Because, if the Church officially states the incompatibility between religious values and Mafia "morals", in a sense it breaks the historical ties that the Mafia has always had with external society. We need to understand how important the religious dimension is for the Mafia collective identity and social identity to perceive the effect that the stronger position of the Church would have on the organization. By financing, organizing and playing prominent roles in these collective ceremonies throughout its history, the Mafia has consistently presented itself as a repository of traditional values that are central to the cultural dimension of wider society. By openly denouncing the Mafia, the Church would officially break these ties, the very ties which have always represented one of the main sources of strength for Mafia groups.

How do Mafia members reconcile Christianity and crime? How can they be both criminals and Catholics?

One common idea is that Mafiosi simply exploit their religiosity to achieve external consensus. This is too simplistic and it does not take into account how complex and varied the phenomenon of Mafia religion is. Since Mafiosi are initiated into the organization, they enter a totalizing universe which redefines their social identity entirely and which inscribes into this collective identity a set of Mafia values, some of which are shared with external society. This is the case for religious values. It is only when we look at the phenomenon from this perspective that it becomes clear why Mafiosi do not see a contradiction between Mafia "ethos" and religious values: some of them, as testimony of Mafia defectors demonstrates, kill in the name of God, have God on their side.

It cannot be dismissed simply as pretending to be religious. As the judge Giovanni Falcone said: Entering a Mafia is converting into a religion - one never stops being a priest and one never stops being a Mafioso. And, if you enter the Mafia and your bosses tell you there is no disagreement between Mafia morals and religion, and you get support from the local members of the Church, you don't see the contradiction anymore.

Rossella Merlino is the head of Italian Studies and lecturer at Bangor University in the UK. She wrote her PhD thesis on the religious dimensions of the Sicilian Mafia.

The flashy funeral of an alleged mafia boss has left Italian politicians and media furious. It is the latest in stream of mafia-related scandals to rock Rome this summer. (21.08.2015)

The 'ndrangheta organized crime network took over from the Cosa Nostra as the wealthiest and most powerful Italian Mafia in the world. Another 355 people will be tried and face sentencing in coming years.