The death toll has climbed to 80 after rescuers in Cameroon pulled more bodies from the debris of a derailed passenger train. Cameroon's president has declared Monday a national day of mourning for the victims. 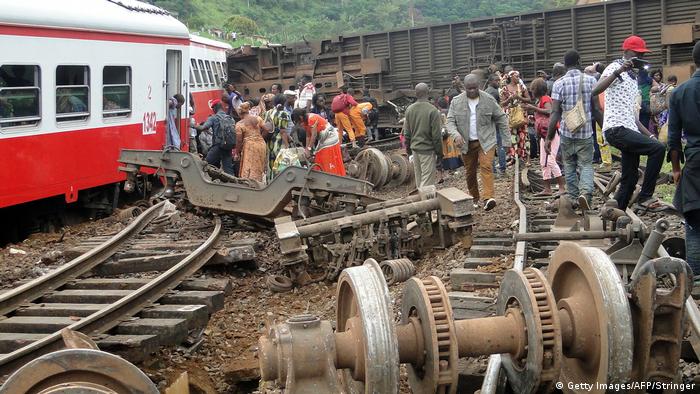 A passenger train crashed in Cameroon last Friday killing 80 people and injuring 600 others, the country's transportation minister said on Monday.

"We expect the death toll to rise even further," Cameroon's Transportation Minister Edgar Alain Mebe Ngo'o said. "There may still be corpses hidden in the rubble and we have critical cases in hospital."

The train was packed with more than 1,400 passengers when it derailed near the central city of Eseka while traveling from the capital Yaounde to the city of Douala.

Extra cars had been added to the train to accommodate additional passengers after a bridge collapse blocked an alternate route.

Four of the train carriages toppled into a ravine at high speed, crushing passengers. Witnesses said bodies were strewn around the crash site, with some of them mangled beyond recognition.

Cameroon President Paul Biya declared Monday a national day of mourning for the victims. Flags flew at half mast while citizens attended planned church services across the country.

Biya, who returned to the country on Sunday after a month's absence, called for an inquiry into the accident.