Several Shiite pilgrims near Baghdad have been killed during an attack during one of Islam's most important holidays. Meanwhile, shootings in northern Iraq have cast a shadow over Eid al-Adha celebrations. 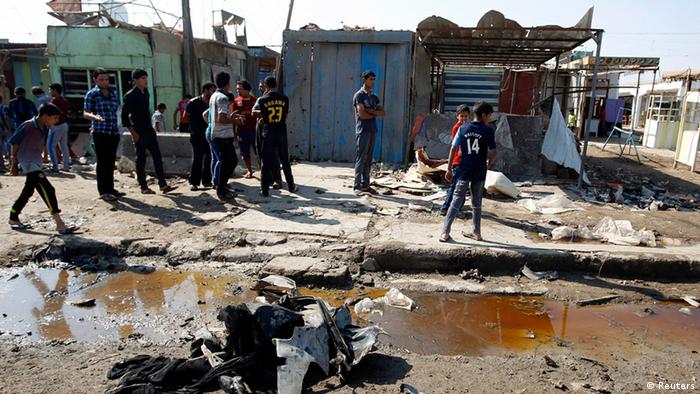 A bomb blast and shootings in Iraq disrupted the second day of the Islamic holiday Eid al-Adha on Saturday.

A "sticky bomb" underneath a bus carrying Iranian Shiite pilgrims was detonated on Saturday, killing at least five passengers and wounding at least 19, according to Iraqi officials. Medics also confirmed the death toll. The passengers were reportedly travelling to a Shiite shrine in Baghdad for the Muslim holiday Eid al-Adha.

No group has yet claimed responsibility for the attack.

In the northern city of Mosul, security officials reported separate shootings that killed at least five other people. They estimated that more than 10 people were injured in the shootings as well. The gunmen had targeted members of the Shabak community, according to the news agency AFP.

Violence against the Shiite community has broken the relative peace across Iraq over the past week. Last Saturday, attacks led to the deaths of about 12 people. A car bomb and mortar attack in a predominantly Shiite neighbourhood in Baghad increased the death toll by nine.

This year's Eid al-Adha religious holiday has been marred by violence across the Muslim world. On Friday, a suicide bomb killed at least 40 people at a mosque in northwestern Afghanistan. Meanwhile, there was renewed fighting in Syria despite a UN-Arab League-brokered truce. The death toll in the war-torn country reached nearly 150 by the end of Friday.

Muslims worldwide began celebrating the four-day religious holiday on Friday, also known as the "Festival of the Sacrifice." Members of the Islamic faith commemorate Abraham's willingness to sacrifice his son, Isaac.