As forces loyal to Burundi's President Pierre Nkurunziza battle forces loyal to former spy chief Godefroid Niyombare, divisions in the military have raised fears that the country may once again be torn apart by violence. 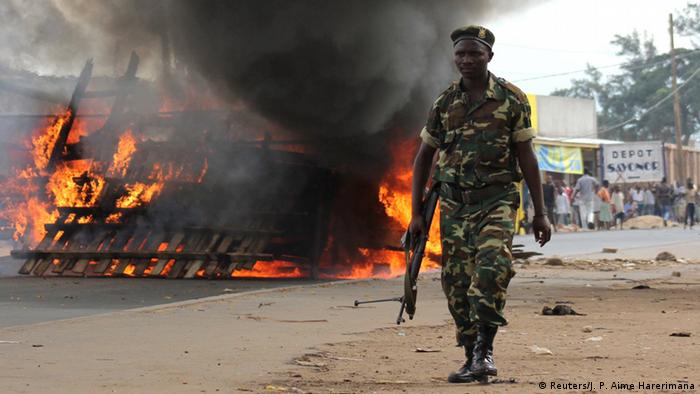 For an assessment of the developing situation in Burundi, DW turned to Phil Clark, a lecturer in international politics at SOAS in London.

DW: Do you see the risk of another civil war emerging as clashes between supporters and opponents of President Nkurunzia continue?

Phil Clark: I think it's too early to say whether what we're seeing is the early stage of a civil war. It's clearly a very worrying situation in Burundi, particularly in the capital, Bujumbura. I think the most worrying element is that the fighting at the moment is taking place between different factions of the army. Up until this point there have been protests, and some protesters have been killed, but the thing that could really escalate this violence is the army fighting itself. At the moment this is constrained just to Bujumbura, but the concern, I guess, is that this could extend to other parts of the country in the coming days and weeks.

Who holds power in the army ? General Godefroid Niyombare, who announced the coup against President Nkurunziza, or Army Chief of Staff General Prime Niyongabo, who claims the attempted coup has failed?

Again, it's very difficult to tell at this stage. On Wednesday (13.05.) it seemed like Niyombare was in control and that his forces were holding most of the key strategic sites in Bujumbura. But as of Thursday morning and into Thursday afternoon, the situation is much more fluid. If anything, it seems as though the military factions that are loyal to President Nkurunziza have captured, for example, the airport, the national radio station, and the national television station. In fact, it is the opposition forces within the military that are having to fight to try and gain control of those sites. So it's a very uncertain situation, and it's a situation that has developed very quickly even since Wednesday.

Nkurunziza is currently not in the country. He was attending a summit of East African leaders in neighboring Tanzania when the coup was announced. What would happen if he were to try to return to Burundi? Would this fuel tensions even more?

I think what we would see if Nkurunziza did decide to come back to Burundi would be that his forces would rally around him, and I think that they would attempt to fight their way to the airport to try to protect him as he returned. And, of course, it would be a key objective of the opposition forces within the military to try and take Nkurunziza out. So it's not surprising that the president, or ex-president, is staying in Tanzania for the time being. It think he would want to know that loyalist forces in Bujumbura have got more control than they have at the moment and that it's safe for him to return. But the situation is much too volatile for that at the moment.

Is there room for compromise between the rival factions?

There were some reports on Thursday afternoon that the factions had been talking to one another behind the scenes. It seems as though there is fighting going on, but there's talking in the background. I guess the hope is, that because Niyombare is himself a very popular figure through all of the factions of the military - he's seen as a consensus figure – that he may be able to cobble together some sort of a compromise deal between these different groups within the armed forces and that he could emerge as this kind of cohesive figure. At the moment, I think that's not happening, but perhaps the greatest hope for this situation settling down is that Niyombare can bring a certain degree of peace and coherence to all this.

What could a potential compromise look like under Niyombare?

I think under Niyombare we would see some sort of interim government put in place that would usher Burundi into a period of elections in June. I don't think that Niyombare could tolerate the return of President Nkurunziza. And so the task that faces him is convincing the loyalist faction that in fact Nkurunziza has lost, that there's massive popular opposition to the former president, that the country as a whole really can't tolerate his return, and so the elections would need to happen without him in June. It's going to be a very difficult thing for Niyombare to convince the loyalists that that's the way forward.

How could East African leaders get involved to help solve the crisis in Burundi?

Even in the last couple of days I think we've seen East African leaders rally to the cause, and we've seen this summit, of course, in Dar es Salaam. There is talk that various African leaders may even try to travel to Burundi if the situation settles down. And I think the role that they can play is one of face-to-face negotiations. I don't think that this kind of lobbying from a distance that they've been involved in up until now has really made much of a difference. They would actually have to be in Bujumbura to try to put pressure on Niyombare and some of the loyalist military leaders to put down their weapons, to talk and to find some sort of a compromise deal. And, of course, the situation in Burundi is of huge concern to all of the regional leaders. It's not because they worry that the violence in Burundi could spread across the borders – I don't think that's the prospect at this stage. But the concern is the humanitarian crisis, especially with refugees in the tens of thousands fleeing into the regional countries. That's the kind of situation that worries especially the leaders of Tanzania, Rwanda and also the Democratic Republic of Congo.

Heavy clashes in Burundi after coup attempt, as hiding president calls for calm

Burundi's president, the target of an attempted coup, has appealed for calm from a secret location in Tanzania. There has been heavy fighting between rival troops in Burundi's capital. (14.05.2015)

Burundi army General Godefroid Niyombare has claimed he has ousted President Pierre Nkurunziza who was seeking a third term in office. But it's unclear who holds power, says analyst Yolanda Bouka. (13.05.2015)

A top Burundian general has claimed that President Pierre Nkurunziza has been dismissed for unconstitutionally seeking a third term in office. The president was in neighboring Tanzania at the time of the announcement. (13.05.2015)