Burundi: Ex-president gets prison term for killing another former president

Buyoya was accused of the murder of Melchior Ndadaye, who had defeated him to become Burundi's first freely elected president. The former leader dismissed the trial against him as a "sham." 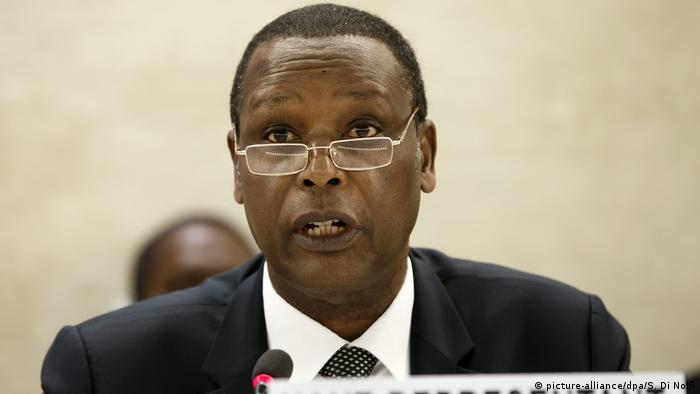 Peirre Buyoya at the European UN Headquarters in 2015.

Burundi's top court sentenced former President Pierre Buyoya to life imprisonment on Tuesday, for the murder of another former president in 1993.

The court also sentenced 18 others in relation to the case, three of whom were given 20 years in prison. Many of those convicted, including Buyoya, did not appear in court since they were abroad.

"We reject these judgements, which are in no way binding on us," Buyoya said in a statement on Wednesday.

He argued that the trial had been "purely political" and a "sham," alleging that defense lawyers had been blocked from accessing case files.

Those sentenced were also ordered to collectively pay a fine of 103 billion Burundian francs (€45 million; $53 million).

After winning independence from Belgium in 1962, Burundi had growing tensions between the majority Hutu group and minority Tutsis.

Ndadaye was killed, along with several of his cabinet ministers, in an ambush by Tutsi soldiers four months after he won the election. A few low-ranking officials were arrested for the assassination in 1998.

The murders and the following political turmoil led to a civil war that lasted until 2016. Around 300,000 people died in those ethnic clashes.

Ndadaye's FRODEBU was Burundi's largest political party at the time. His successor Cyprien Ntaryamira died in a plane crash in 1994 in Rwanda.

Pierre Buyoya is currently positioned as the African Union's representative in Mali and Sahel.

The African Union is yet to comment on the sentence.

In November 2018, an international arrest warrant was issued against Buyoya. He said it was  "another diversionary move aimed at burying painful, unresolved questions," referring to a political crisis in the nation following the 2015 elections.

He said that the officers who had killed Ndadaye had already been arrested.