Nine people have been killed by an unknown gunman in Burundi's capital, amid concern that a spiral of violence could hit the country. Neighboring Rwanda has warned of an impending massacre. 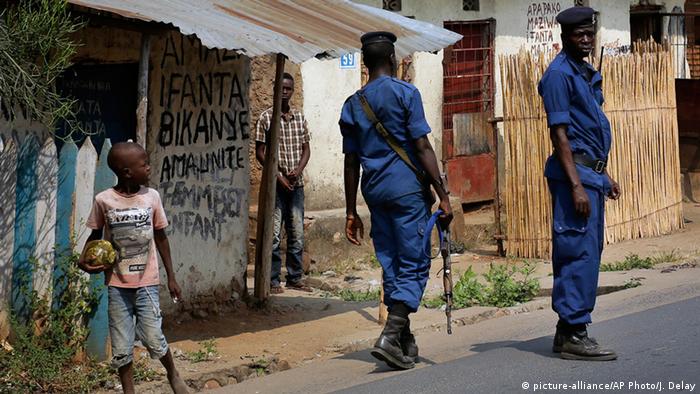 Police have started house-to-house searches for weapons in opposition areas of the capital, Bujumbura, on Sunday as the deadline set by Burundi's President Pierre Nkurunziza for "criminals" to hand over firearms or be treated as enemies of the state expired.

Hundreds of police and soldiers were deployed to the opposition district Mutakura, where many residents have fled amid concern of a crackdown on "enemies of the nation."

Burundi hassuccumbed to violence ever since Nkurunziza announced he would run for a third term, which he secured in July in what the opposition said was a violation of the constitution. Nkurunziza's re-election triggered protests, and in May there was a failed coup attempt.

At least 200 people have been killed since April, with bodies found dumped on the streets almost daily. More than 200,000 people have fled the country.

In the latest spell of violence, an unknown gunman killed nine people at a bar in the capital on Saturday night.

Rwanda warns of a 'massacre'

Rwandan President Paul Kagame, a sharp critic of Nkurunziza, has accused Burundi's leaders of carrying out "massacres" and warned a spiral of violence could lead to civil war or even genocide.

"People die every day, corpses litter the streets... How can the leaders allow their population to be massacred from morning to night?" Kagame said on Friday, but it was reported on Sunday.

Kagame, the former Tutsi rebel leader whose intervention stopped the 1994 Rwandan genocide, said what was happening in Burundi reminded him "a little" of what occurred in Rwanda.

"They (Burundi) should learn from what happened here," Kagame said.

The Rwandan capital, Kigali, has become home to fleeing opposition and civil society activists. Burundi says rebel forces from the failed May coup are also holed up in Kigali and backed by Rwanda.

Kagame's comments add to a chorus of concern coming from European capitals, Washington and the United Nations that the crisis could turn into a repeat of Burundi's brutal 1993-2006 civil war, in which at least 300,000 people died.