Burma warns EU critics that Suu Kyi trial is an internal issue | News and current affairs from Germany and around the world | DW | 28.05.2009

Burma has told Asian and European leaders who have called for the release of all political prisoners to stop meddling in its internal affairs. Burma denies that the trial of Aung Suu Kyi is politically motivated. 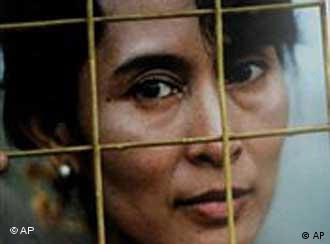 Speaking at the summit in Phnom Penh on Thursday, Burma's Deputy Foreign Minister Maung Myint told his counterparts from Southeast Asia and Europe that the trial of pro-democracy leader Aung San Suu Kyi was an "internal legal" issue.

"It's not political. It's not a human rights issue, so we don't accept the pressure and interference from abroad," Maung Myint said in the strongest reaction by Burma so far to international outrage at the trial of Suu Kyi.

His comments came as ministers of the Association of Southeast Asian Nations (ASEAN) and the European Union, who were meeting in Cambodia, urged Burma to free all political prisoners including Suu Kyi.

"We are still deeply concerned about Mrs Suu Kyi's detention," said Czech Foreign Minister Jan Kohout, whose country holds the rotating EU presidency. "She should be released immediately and the Burmese government must enter dialogue with all political parties," he added.

At the end of their meetings, the EU and ASEAN issued a joint statement calling on Burma to grant early release to all political prisoners and lift restrictions on political parties.

Suu Kyi is being tried at a prison in Rangoon on charges that she violated the terms of her house arrest after an American man swam to her lakeside house in early May. The Nobel Peace Prize winner has denied the charges, saying that she only offered temporary shelter to the man.

The trial has been adjourned to Monday. The court only allowed testimony from lawyer Kyi Win to be heard. He is Suu Kyi's only defense witness after the judge rejected three others without giving a reason. If convicted, Suu Kyi faces five years in prison.

Critics have denounced the process as a show trial aimed at keeping the democracy icon in detention during an election next year that is expected to increase the generals' hold on power.

Even though the trial of Aung San Suu Kyi dominated the meetings, the EU and European Commission did manage to sign a cooperation treaty with ASEAN nations.

Jan Kohout described the treaty as a "road map" with the two sides agreeing to cooperate on issues ranging from the global financial crisis and human trafficking to climate change.

A high-level meeting of European and Southeast Asian countries kicks off in Cambodia on Wednesday. Both regions are seeking to strengthen cooperation and will spend two days discussing the partnership's future direction. (26.05.2009)

Ministers from 45 European and Asian nations wrapped up a meeting in Hanoi on Tuesday. In a surprise move, they agreed on strong statements condemning North Korea's nuclear test and Burma's treatment of dissidents. (26.05.2009)

The EU says there's no justification for the charges brought against Burmese opposition leader Aung San Suu Kyi for letting an unauthorized US national visit her home where she's been under house arrest for six years. (14.05.2009)