Bundesliga: Julian Nagelsmann to take over as coach of RB Leipzig in 2019

Julian Nagelsmann is to take over as head coach of RB Leipzig at the end of the upcoming Bundesliga season. The news came shortly after his current club, Hoffenheim, announced that he would be leaving in a year's time. 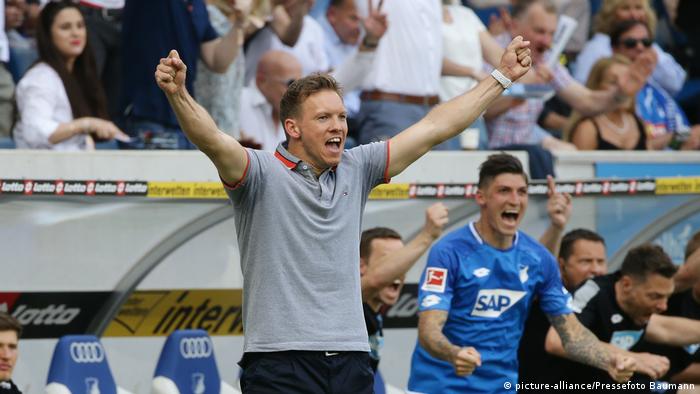 RB Leipzig announced the appointment of Julian Nagelsmann as their new head coach on Thursday, saying that he would join the club prior to the start of the 2019-20 season.

A statement released by the club said that the 30-year-old Nagelsmann would join RB Leipzig on a four-year contract, but that it would refrain any from further comment on the move, as he remains under contract at Hoffenheim.  It also said that it would announce who would coach the team for the upcoming season before the club embarks on its preseason training camp. There has been much speculation that this could turn out to be RB's sporting director, Ralf Rangnick, who has previously held both posts concurrently.

The announcement out of Leipzig came shortly after TSG Hoffenheim had issued a statement, in which the club revealed that Nagelsmann would be leaving after the upcoming campaign.

In that statement, Nagelsmann said that by announcing his intention to leave, he hoped to avoid undue distractions throughout the coming season.

"I owe it to TSG and all of their staff as well as the team and the fans to ensure that this historic season, in which we will be in the Champions League for the first time, is not encumbered by constant speculation about me and my future," Nagelsmann said.

"We regret the decision that Julian has taken," Hoffenheim's managing director, Peter Görlich, said. He added, that he and the club were looking forward to the start of a "remarkable season" in the history of the club.

The 30-year-old Nagelsmann, who joined Hoffenheim as a youth coach in 2010, became the Bundesliga's youngest-ever bench boss, when, at the age of 28, he took over the Bundesliga side in February of 2016. When he took charge of the team, Hoffenheim were mired in 17th place in the standings, but Nagelsmann saved the club from the drop, before leading it to European qualification the following campaign. This past season, he led Hoffenheim to a third-place finish, qualifying them for the Champions League for the first time.

Neither the RB Leipzig nor the Hoffenheim statement made any mention of a transfer fee for the coach, but before Nagelsmann's appointment was made official, the mass-circulation daily Bild reported that his new club would pay the escape clause in his contract worth €5 million ($5.8 million).

Leipzig had been in the market for a new coach since Ralf Hasenhüttl left the club in mid-May.

The coach of Bundesliga strugglers Hoffenheim has resigned. Huub Stevens had been appointed just last October in the hopes that the veteran Dutch coach would be able to save the club from relegation. (10.02.2016)