Brzezinski: Finland role model for Ukraine | World | Breaking news and perspectives from around the globe | DW | 20.02.2014

Former US National Security Advisor Zbigniew Brzezinski calls on Russia to push Ukraine’s President Viktor Yanukovych to step down and Germany to put up some money. He also tells DW how he envisages a future Ukraine. 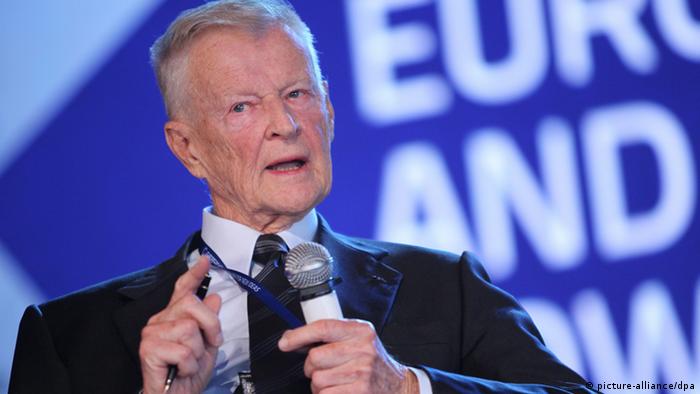 DW: The situation in Ukraine is very volatile and has gotten increasingly violent over the last few days. Do you fear an outright civil war in the country?

Zbigniew Brzezinski: I think that is in fact threatening Ukraine. But I still am of the view that this issue can be resolved by compromise provided that the there is a firm stance by the West, provided that Yanukovych is willing to negotiate in good faith and provided that Putin realizes that it's in Russia's long-term interest to have this issue resolved by compromise. I am not sure that all three of these three conditions can be met and it increasingly appears that Yanukovych is altogether unreliable.

What do you make of Yanukovych'srole in this crisis so far? Do you think he can remain in office?

I think it's increasingly doubtful. In the beginning one might have considered some arrangement that would involve him staying in as president for at least a while until the situation settles down and genuinely democratic elections for a president with fewer powers can be held. He appears to be either cowardly or indecisive or deceitful.

Couldn't he simply alleviate the situation by stepping down now?

That would certainly be helpful. But I imagine that he is not only concerned about his position as president, but also about the personal wealth that he has acquired while in office and his son has also acquired since Yanukovych became president.

The West, that is the US and the EU, has been divided over how to deal with the situation in Ukraine. What is your sense of the West's actions so far?

So far it has not been very impressive. It was slow to react to the sudden change in Yanukovych's stance several months ago. It then didn't step forward with any specific and immediate proposals to deal with the deepening socio-economic crisis in the country. Only in the last week or so has it generated a more visible engagement. And I think the West is now increasingly conscious of the fact that it has to have a meaningful financial package as well as a clearly defined set of political objectives that give Ukraine the opportunity to remain a good neighbor to Russia, but at the same time expand its relationship with Europe; and that America itself can reassure Russia that a Ukraine that has freedom of movement towards Europe does not mean a Ukraine that becomes part of coalition that threatens Russia's interests; and last but not least, that if Russia is not prepared to accept this it will find itself confronted in all probability by an increasingly hostile, bitter and perhaps altogether explosive Ukraine.

I am neither for nor against sanctions by which I mean I would not make sanctions the principle tool of our policy which I have outlined in answering your last question. But I would not avoid applying sanctions against particular individuals who have financially benefitted from access to the West, but who are playing a negative role both in Ukraine and in Russia.

Let's talk about the West a bit more. Has the Obama administration done enough in this crisis in your opinion?

It has been very slow, but it is doing much more now. It is becoming very seriously engaged. The United States has to be engaged indirectly in the negotiations between the EU and the Ukraine and much more directly on a bilateral basis in discussing the issue with the Russians, although the EU may wish to be engaged in these discussions as well. But to the Russians in the long run a stable relationship with America which doesn't slide into an increasing cold war negativism is of direct interest, as it should be to us as well. Putin should be mindful of the fact that his support for Yanukovych - whom the Russian press increasingly describes as a totally unreliable crook - is not in Russia's long-term interest because he is going to create in Ukraine a widespread anti-Russian sentiment, maybe not among all, but certainly among the majority of Ukrainians. And that is not in Russia's interest.

Do you hope that Russia and Mr. Putin press Yanukovych to step down?

I think that would be a very healthy contribution and that would enable Putin, indirectly of course, to influence who would replace him. Not all of the oppositionists - probably at this stage most of the responsible oppositionists are not anti-Russian. But these events, clearly occurring under Russia's protection, are likely to turn the Ukrainians into very intensely anti-Russian nationalists.

What then do you see as the role of the EU, whose lack of engagement has been criticized very vocally recently by the US?

I am glad that the EU is actively involved and that prominent foreign ministers of some leading EU countries are in fact right now in Kyiv. But the bottom line is - and this is particularly pertinent to Germany - if the EU is to be serious it has to put up some money. It's very easy to talk about democracy and long-term cooperation, but the fact is that money is also needed right now to stabilize Ukraine. But let me emphasize my key point. If we want a solution that's constructive it has to be based on compromise. And I can envisage Ukraine evolving in the context of a constructive compromise into a country whose domestic and foreign policies will be somewhat similar to that of Finland.

You mentioned Germany's role in the Ukraine crisis. What do you make of Berlin's stance so far?

I think it's good that Germany is involved, but I think that Germans have to take the lead in an area which they resent having to do so - which is putting up some money. You cannot have a compromise for the present problem that is acceptable and constructive and which is good for the West as well as for Russia without some serious financial involvement by the EU. And the fact is that Germany is the most prosperous and economically most successful member of the EU.

Zbigniew Brzezinski served as National Security Adviser to President Jimmy Carter from 1977 to 1981 and is regarded as one of the preeminent US foreign policy scholars. He is currently professor of international relations at Johns Hopkins University and a counselor and trustee at the Center for Strategic and International Studies in Washington, DC.

Most Western politicians in Viktor Yanukovych’s position would have long resigned. But the Ukrainian president has no such intention. A review of the past four years explains why. (20.02.2014)

On the ground in Kyiv

As the situation in Ukraine intensifies, reporters in Kyiv's Independence Square are sharing what they experience via social media. DW's Mareike Aden was on the Maidan when the violence broke out. (20.02.2014)