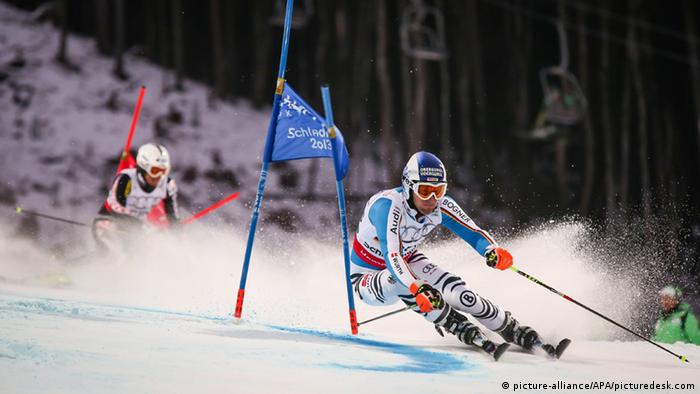 Lena Dürr, Maria Hölf-Riesch, Felix Neureuther and Fritz Dopfer beat Canada in a dramatic finish for bronze in front of a crowd of nearly 20,000 fans.

The German Ski Federation (DSV) team eliminated France in the quarter-finals, but were beaten 4-0 by Austria in the semi-finals 4-0. In the gold medal race, Germany and Canada scored two race victories each, with Germany then granted the bronze courtesy of a meager 0.03-second advantage in aggregate times over the four runs.

World Cup champion Marcel Hirscher helped the Austrian favorites - also featuring Nicole Hosp, Michaela Kirchgasser and Philipp Schoerghofer - win their first gold medal of the championships. All four Austrian skiers won their races in the final against Sweden, as was the case against Germany in the semis.

The competition continues on Thursday with the women's giant slalom event.

Ted Ligety has captured his second gold medal of the 2013 World Ski Championships in Schladming. The American finished first in the men's super-combined to add to his super-G title last week. (12.02.2013)

Marion Rolland has taken first place in the Women's Downhill at the Alpine Ski World Campionships. The surprise win was the first at a major championship for the French skier. (10.02.2013)

Maria Höfl-Riesch has won the gold medal in the super-combined event at the World Ski Championships being held in Austria. This was the first medal at the championships for the German team. (08.02.2013)