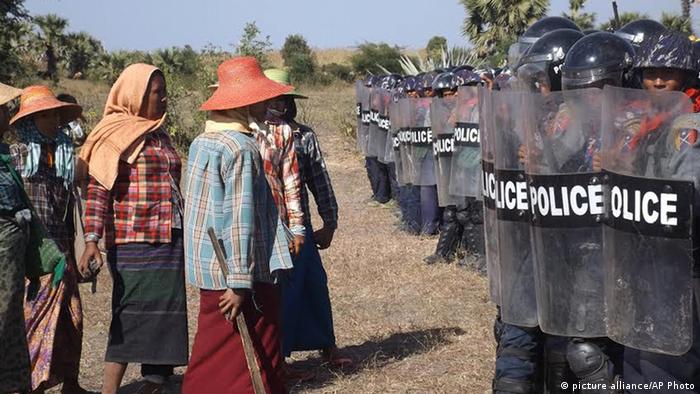 "Sometimes there is a very strong smell from the sulphuric acid factory; people cannot stay in the village at those times. Our eyes tear up and we cough. It depends on the direction of the wind." These are the words of a resident of Kankone, a village located just a few hundred meters from the Sabetaung and Kyisintaung (S&K) mine, part of Myanmar's notorious Monywa copper mine complex.

There is considerable anxiety amongst the villagers about the mine's impact on their water, farmlands and health, particularly as it is only a short distance away from the local school.

The statements are part of an extensive report released by Amnesty International (AI) on Tuesday, February 10, examining the Southeast Asian country's mining sector. The 205-page document, titled "Open for Business? Corporate Crime and Abuses at Myanmar Copper Mine," aims to describe how forced evictions and pollution linked to the mine complex have destroyed livelihoods and exposed thousands of people to health risks. 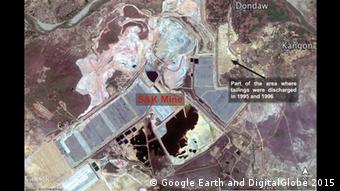 Moreover, it accuses foreign companies of colluding with the Myanmar authorities in human rights abuses and illegal activity around the complex. "Myanmar offers the perfect storm of a rich natural resource base, a weak legal system and an economy dominated by military and special interests.

Large deposits of copper are located in the mountains in the Monywa district in Central Myanmar. These deposits have been developed as two, linked mining operations - the S&K mine, which began operations in the 1980s, and the Letpadaung mine, which is under construction.

The controversies surrounding the mining venture began with the confiscation of land in the mid-1990's, when the S&K mine was part of a joint venture between by a Canadian mining company, Ivanhoe Mines (now Turquoise Hill Resources), and a Myanmar state enterprise.

Ten million people worldwide have no nationality, according to UNHCR. But as the UN refugee agency's Babar Baloch tells DW, the issue can be solved with just a few steps and political will. (05.11.2014)

"Thousands of people were forcibly evicted in the 1990s, in violation of international law, to make way for investment by the Canadian company which knew this would lead to the evictions, yet did nothing," said the authors of the AI report who also accused the firm of profiting from "more than a decade of copper mining carried out without attempting to address the thousands left destitute."

In 2010 - 2011 the Monywa project was taken over by a joint venture between the Union of Myanmar Economic Holdings Limited (UMEHL) and Wanbao Mining Ltd, a subsidiary of China North Industries Corporation.

Of particular concern for the rights group, however, is the latest addition to the complex, the Letpadaung mine, located about 100 kilometers (60 miles) west of Mandalay, the nation's second-largest city. The massive project has made international headlines in the past years as the scene of some of the fiercest opposition to corporate land-grabbing in Myanmar.

According to the human rights group, four villages, made up of 441 households, are supposed to be completely relocated to make room for the latest mining project which began construction in 2011. Of these, 245 have been moved to resettlement sites, while the remaining 196 have refused to leave.

Land, largely used for farming, has also been acquired from 26 other villages. But as of May 2014, almost half of the residents (44 percent) had refused to relinquish their lands for the project, according to the Environmental and Social Impact Assessment (ESIA).

The contentious issue has repeatedly triggered civil unrest, with protests by disgruntled villagers being met with inordinately violent reactions from security forces. "I thought they cannot take away land like this now that we are a democracy," a 37-year-old villager who was forcibly evicted from his farmland to make room for the Letpadaung Mine, was quoted by AI as saying. 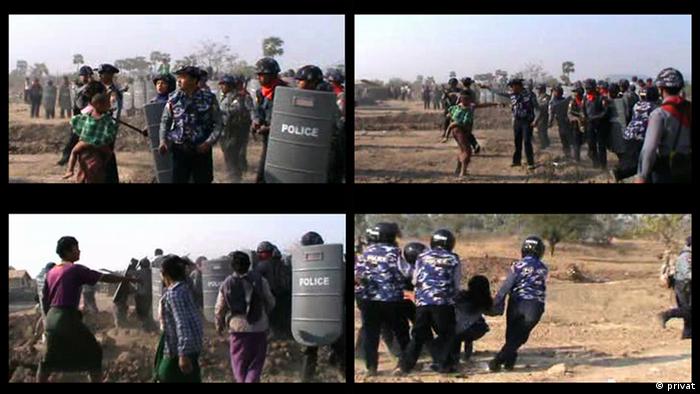 Last December, for instance, Khin Win, a woman in her 50's was killed and 20 others were injured when guards and police opened fire on demonstrators.

'My nerve endings are not working properly'

Tensions had already flared up in November of 2012, when police threw smoke bombs containing white phosphorous - a highly toxic and explosive substance - to disperse demonstrators. More than 100 people were injured, with some suffering severe burns and lifelong disabilities as a result.

"I still find it difficult to sit on the floor and walk for long or far… My nerve endings are not working properly…I can't move my right hand or leg properly, the skin feels tight." U Teikkha Nyana, an elderly monk who suffered severe second and third degree burns after being hit by white phosphorus munition, was quoted by AI as saying.

The AI paper claims that part of the attack was launched from inside the Wanbao company compound and accuses the Chinese firm of directly engaging in forced evictions, and colluding with the authorities, including by providing bulldozers to destroy crops. 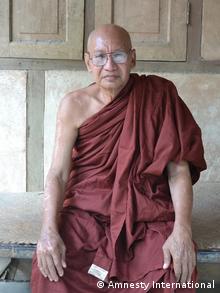 'I still find it difficult to sit on the floor and walk for long or far,' said U Teikkha Nyana

Due to the ensuing outcry, construction of the mine was temporarily halted and the mining contract was renegotiated to ensure that millions of dollars would go toward community development projects and to pay compensation to villagers, allowing the resumption of mining activities.

Wanbao also reiterated that the mine was only being built upon receiving a majority support from the villagers. Contrary to the figures reported in the AI report, the Chinese company stated that 71 percent of consulted villagers in 35 villages gave their approval to continue the project and that 91 percent of people living in the impacted areas have also supported the project's expansion.

The Chinese Embassy in Myanmar also reacted. Referring to the violent clashes last December, they also brought attention to what they view as the targeting of Chinese mine workers: "We notice that in the turmoil, the Chinese workers, who are peacefully implementing the project, have been attacked without lawful excuse. We are concerned of the casualties and injuries of Chinese citizens caused by the attacks."

But the Amnesty report also slammed Ivanhoe Mines' alleged involvement into what it described as the sale of copper to a "who's-who" of the Myanmar military, claiming it found evidence that Ivanhoe Mines and legal entities associated with the company may have breached Canadian and UK economic sanctions during their divestment from the country.

Over the years, Ivanhoe Mines has been largely defensive and dismissive of corporate abuse allegations. In a 2010 statement about the supposed sale of their portion of the mine, the company rejected the accusations as "just more dishonesty and more arrant nonsense." 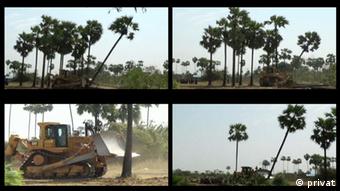 'I thought they cannot take away land like this now that we are a democracy,' said a villager

They maintain that the Monywa Trust was "wholly independent" and in charge of ensuring that asset sales did not break the international sanctions against Myanmar at the time. AI however, says it obtained documents showing that the Trust was in fact not independent.

This AI report also highlights environmental issues, saying that hazardous waste discharged from the mine during the 1990s has still not been fully cleaned up, exposing people to serious health risks.

As for the sulphuric acid factory near Kankone, the report states that UMEHL had constructed it in 2007 to supply acid to the S&K mine without permission from the government.

"When this was exposed, the factory was approved by the authorities, who made no attempt to take punitive action against UMEHL," said AI. The paper also points to wider structural issues, including what the authors view as the "absence of a legal framework to protect people who are highly dependent on land for their livelihoods."

"The people living around Monwya and Letpadaung have suffered more than two decades of abuse linked to the business operations of Canadian, Myanmar and now Chinese corporations. Investment can help Myanmar, but this project benefits the companies while harming the people," said AI's Abraham, adding that the construction of the Letpadaung mine "must be halted immediately until rights issues have been addressed."

The AI expert says the Myanmar government must investigate and remedy past abuses at the mining complex, and impose stronger legal safeguards for the future. "Investment in Myanmar must not come at the expense of the human rights of people living there; it is vital that local state governments require companies entering Myanmar to carry out enhanced due diligence."

A rallying cry for activists

Gregory Poling, a Southeast Asia expert at the Washington-based Center for Strategic & International Studies, says, the Monywa project, and the new Letpadaung mine in particular, has become a rallying cry for activists in Myanmar and abroad.

"Since 2012, it has been seen as emblematic of a number of struggles being fought as part of the reform efforts: for environmental safeguards, land rights, protections against unfair treatment by military-owned businesses like UMEHL, and against what many in Myanmar see as rapacious and inequitable Chinese investment." 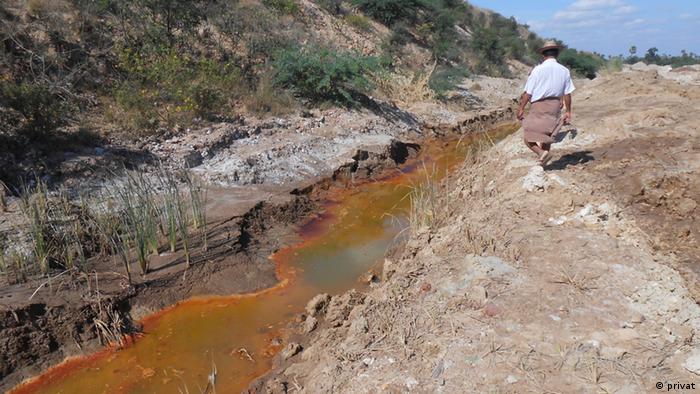 Hazardous waste discharged from the mine has still not been fully cleaned up, says the report

The latter in particular has put the government and others, including opposition leader Aung San Suu Kyi, in a difficult position. Even those in power who were sympathetic to the plight of communities near Monywa felt that they had to defend the sanctity of Wanbao's contract, which it renegotiated to be more equitable to the government and local communities.

"After the strains put on bilateral relations following the 2011 suspension of the massive Chinese dam project at Myitsone, Myanmar's leaders seem to have decided they could not risk the economic and diplomatic fallout of suspending another large Chinese project," said Poling.