A twelve-year report into the Bloody Sunday massacre in Northern Ireland has ended. The report concludes that British troops were "unjustified" in firing on protestors on that day in 1972. 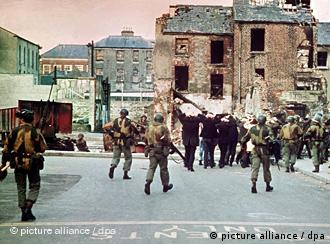 British Prime Minister David Cameron has apologized on behalf of the British government for the 'Bloody Sunday' massacre in Northern Ireland in 1972 that left 14 civilian protesters dead at the hands of British troops.

Cameron presented the results of a massive 12-year inquiry into the incident to parliament on Tuesday, saying that the events of Bloody Sunday were in no way justified.

"What happened should never, ever, have happened," Cameron said. "Some members of our armed forces acted wrongly."

Initial reports made in 1972 showed that British troops had acted appropriately when they fired on Catholic civilians in Londonderry. At the time, the troops indicated that they had fired on civilians who were armed.

However, Cameron said that this was not the case and added that some troops had deliberately made false statements about the shootings to make it appear that they had been justified in firing.

The report concludes that the British troops fired first and were unprovoked.

A breakthrough deal for Northern Ireland could see the transfer of judicial and policing powers from London to the province’s power-sharing government by April. A vote on devolvement will be held in March. (05.02.2010)

Two men have been arrested near Belfast for Monday's murder of a policeman for which a splinter IRA group claimed responsibility. Authorities hope the interrogations will shed light on the fresh spate of violence. (11.03.2009)

Troubles not solved in Northern Ireland

A multi-party power-sharing agreement was reached in 1998 in Northern Ireland. But 10 years down the line, Catholic Irish nationalists and Protestants loyal to Britain remain deeply divided. (11.12.2008)