A day after Iranian protesters stormed the British embassy in Tehran, Britain has said it is withdrawing its diplomats, and closing Iran's embassy in London . The question that remains is - who was behind the attack? 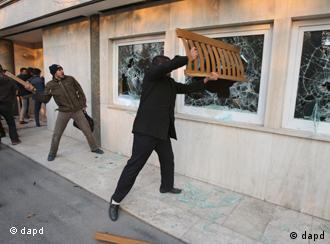 Images broadcast on Iranian state television on Tuesday showed an angry crowd of mostly men gathered in front of the British embassy in Tehran. Women enveloped in black stood at the back.

Chanting "death to England," a group of protesters stormed the embassy compound and a diplomatic residence while the security forces simply stood by.

The protesters smashed windows, burned a British flag and tossed out paper and other objects apparently looted from offices in the embassy buildings. Some of the rioters claimed to have confiscated "sensational documents" from the offices allegedly proving Britain's spy activities in Iran.

The mob that stormed the British embassy issued a swift official statement on Tuesday. "Our actions are a spontaneous reaction of revolutionary students and were not ordered by any state organ," it said. The move served the interests of the Iranian people, it added.

The students were described as members of the Basij militia by the Iranian state media.

Shortly before the statement was read out, Morteza Talaie, a member of the Tehran city council, welcomed the attack in a note to the Jame Jam newspaper, which has close links to the government.

So, just who was behind the attack on the British embassy? Some analysts think the assault was clearly orchestrated by the authorities.

Hamid Etemad (name changed), a lecturer at a university in Iran and an expert on international law said "such an act in blatant violation of international law would be unthinkable without getting a green light from the highest political decision-makers."

Omid Nouripour, foreign policy spokesman of Germany's opposition Green Party, agreed. Tuesday's event was an organized protest, Nouripour said. Forces involved in the brutal crackdown on the Iranian pro-democracy movement in 2009 were among the alleged demonstrators, he claimed.

Nouripour said the attack was used by hardliners in the Iranian regime to try and deflect attention from the current wrangling and disarray in Iran's political leadership.

Some experts say that the attack is not surprising and reflects Iran's mounting frustration with international sanctions.

Mahran Barati, a Berlin-based expert on Iran, said the embassy attack was a desperate reaction from the Iranian regime to Britain's latest round of tough new economic sanctions.

Britain's new sanctions provoked special anger because they require all contacts to be severed with the Iranian Central Bank, which British officials accuse of facilitating Tehran's nuclear program.

The expert added that the imposing of new and crippling sanctions earlier this month by the US, Britain and Canada targeting Iran's petrochemical and banking sector "has hit the regime's main nerve center."

Some analysts suggest that the latest escalation in tensions between the two countries also reflects the growing rifts and power struggles within the Iranian regime.

For years, the Islamic Republic has had no clear-cut power structures. Hardliners within the regime have gradually managed to take control off all levers of power. Ever since a controversial presidential election in 2009, several groups within the conservatives have been busy fighting each other.

Masih Alijejad, a journalist and long-time observer of Iranian politics said that whoever gave the order for the attack on the British embassy, it's nothing short of a hidden declaration of war.

"The embassy of a country is part of the territorial sovereignty of the country," Alijejad said. "If you attack that, you definitely want to send a particular message."

Alijejad stressed that such actions could end up strengthening the hands of hardliners.

"The militants within the Islamic system are provoking a war so that they can cement their own power," she said.

It's not the first time that Iran has seen demonstrations against foreign embassies on its soil. But it was the most serious violence aimed at the British Embassy in Tehran since relations were restored in 1990. Experts caution that things could get worse.

Omid Nouripour, who is of Iranian origin, said the situation is "dramatic" and warned that there is enough reason to fear for the lives of foreign diplomatic staff.

Opinion: Playing with fire in Iran

The attack on the British embassy in Tehran could spark a dramatic escalation of the already strained ties to Iran. DW's Sybille Golte comments that this could have dangerous repercussions. (30.11.2011)

Britain has retaliated for the storming of its embassy in Tehran, expelling Iranian personnel and ordering the Islamic Republic's embassy in London closed in the worst diplomatic row between the two nations in years.

Iran fires back against Western sanctions

The United States, Britain, Canada and France have turned up the heat on Iran over allegations it tested nuclear warhead designs. Russia has condemned the move, which Iran worked Tuesday to play down. (22.11.2011)