UK supermarket group Tesco has slashed its full-year outlook by almost a third. The latest downgrade came in the wake of an accounting scandal and fierce competition in the retailer's home market. 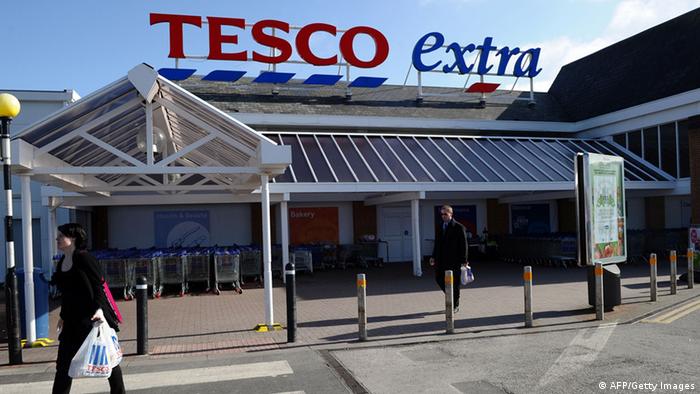 Tesco said Tuesday it expected earnings to take a major hit as it refocused its business amid a fraud investigation into its finances.

The group said trading profit would not exceed 1.4 billion pounds ($2.2 billion, 1.8 billion euros) in its financial year to February 2015.

"Whilst the steps we're taking to achieve a turnaround are impacting short-term profitability, they are essential to restoring the health of our business," Tesco Chief Executive Dave Lewis said in a statement.

British authorities had launched a probe into Tesco after the group revealed in October it had overstated its profits as a result of accounting errors stretching back to before 2013.

The supermarket chain's earnings have been hit severely by increased competition on its home market as customers seeking to save money have turned away from Tesco to discounters such as Aldi and Lidl, igniting a price war in British grocery shopping.

Tesco said it would invest further in better service, with more than 6,000 additional staff in stores and increased product availability on key lines.

The British retailer is the world's third-largest supermarket group after world leader Wal-Mart from the US and France's Carrefour.