The collapse occured in the mountainous region of Chirajara in central Colombia. The 446-meter-long bridge was set to be opened in March as part of a major highway linked to the capital Bogota. 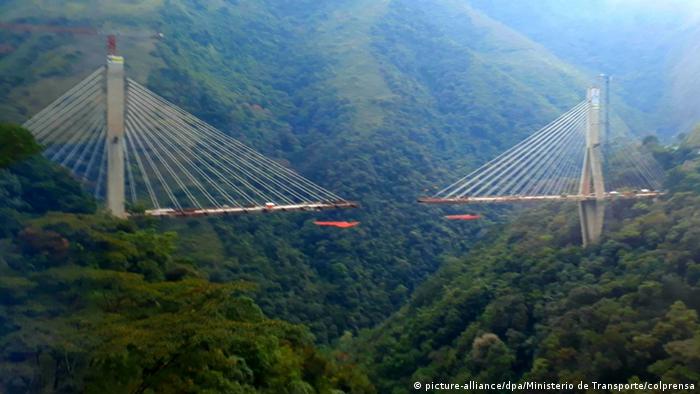 At least 10 construction workers died and several were injured after a partially constructed bridge in central Colombia collapsed on Monday.

The laborers were working on the bridge's drainage system when the incident occurred. The victims fell 280 meters (920 feet) into a ravine in Chirajara about 95 kilometers (60 miles) from the Colombian capital of Bogota.

Nine of the workers were killed immediately and a tenth worker died of his injuries in a nearby hospital. Several laborers were injured and 11 are reportedly missing.

The agency in charge of the project, Coviandes, said that the injured have been taken to a hospital in Villavicencio, the capital of the department of Meta.

Authorities said they are investigating the cause of the collapse and trying to find out how many people were on the structure.

The 446-meter-long bridge was set to be inaugurated in March as part of a highway connecting Bogota to the city of Villavicencio.

Transportation Minister German Cardona flew over the site of the collapse later on Monday and visited rescue staff on the ground with Dimitri Zaninovich, the head of the national infrastructure agency.

The bridge and road overhaul are a part of the country’s massive “4G” infrastructure program that is attracting billions of dollars in private-public partnership investments to improve Colombia’s transportation system with eight bridges and five tunnels.