Brazil is facing up to the worst-ever natural disaster in its history as reports suggest more than 500 people have been killed by deadly mudslides in the Serrana region just north of Rio de Janeiro. 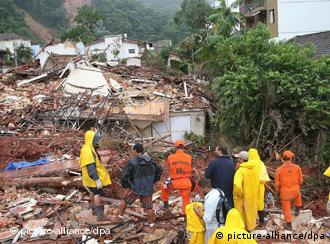 As torrential rain continues to lash the already waterlogged region, there are fears that more mudslides and loss of life could follow with rescue workers in the most heavily-affected towns of Novo Friburgo, Teresopolis and Petropolis racing against time to locate survivors.

Rescue efforts have been hampered, not only by the continuing rainfall but by the damage inflicted to the region's surrounding infrastructure. The equivalent of a month's rain fell in just a few hours before dawn on Wednesday, destroying roads and bridges and sending waves of mud through towns and hamlets, washing away homes and knocking out telephone and power lines.

Initial reports suggest that the death toll is higher than that for the total of all rain-related deaths in the whole of Brazil in 2010 and eclipses the 437 killed in a 1967 mudslide tragedy in a coastal town called Caraguatatuba.

The bodies of victims recovered from the floods are being stored at churches and police stations throughout the region while homeless survivors are taking shelter in gymnasiums and schools. In most towns affected by the disaster, crowds of people gather around photos of the dead pinned to the exterior walls of morgues, fearing the worst and hoping not to see the faces of their missing loved ones.

The tragedy is the first real test for President Dilma Rousseff who took over form her mentor Luiz Inacio Lula da Silva two weeks ago. The president visited the area on Thursday and admitted she was "overwhelmed" and "shocked" by the devastation.

She pledged "strong action" by her government, and reiterated her promise to increase the already 780 million Reais ($470 million, 356 million euros) in emergency aid and medical supplies which had already been sent to the afflicted region. 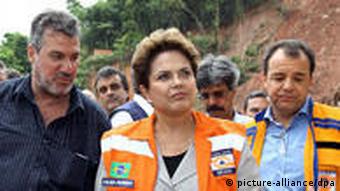 Despite the president's arrival on the scene and the aid which the government has already allocated, in some communities the shock of the disaster has already turned to anger - directed at those who have taken advantage of the poor by creating cheap housing on illegally cultivated land and the government's inability or unwillingness to intervene.

"The reason for tragedies of this kind does not lie in nature," Carlos Vainer, professor at the university of Rio de Janeiro (UFRJ) and a specialist in town planning, told Deutsche Welle. "There are no physical disasters, only social tragedies which are created by the way society carries out cultivation and disrespects the environment."

According to researchers, the Serrana mountain region has suffered from decades of unlawful cultivation which has severely damaged the environment. The stripping of the mountainsides has long been linked to the type of mudslides that devastated the region this week and killed more than 100 people in a similar disaster at the beginning of 2010.

"This is the continuation of an annual, predictable tragedy," lamented Vainer.

While some are blaming local and national authorities for not stopping the illegal cultivation of mountain regions, other analysts are urging the Brazilian people to look at themselves before distributing blame.

Public should do more to stop dangerous practice 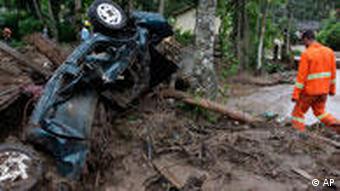 The stripping of mountainsides led to the landslides

"Even though this is a regular phenomenon, there is no prevention culture being developed in Brazilian society," Rubem Cesar Fernandes, president of the Brazilian non-government organization Viva Rio, told Deutsche Welle. "The cultivation is completely informal, spontaneous, uncontrolled and without organization from the local authorities."

"But it is just as important for civil society to make a stand as it is the state."

Rubem Cesar believes that - alongside state authorities - schools, churches, neighborhood associations and other local organizations should take a stronger role in the prevention of illegal cultivation and educate people about the risks the practice carries.

He added that the disaster once more showed that political control over cultivation is absent and that the lessons of the past have not been learnt. "When the tragedy happens, we have no measures ready," he said. "In a way, the government is responsible for everything. The civil defense is not well enough equipped to deal with such a big problem on its own. There needs to be a real change in thinking."

Carlos Vainer believes the problem has its roots in the federal state of Rio de Janeiro. Towns are exploited by real estate speculators and unscrupulous building companies and that government officials ignore the dangers as the practice provides housing for the poor. 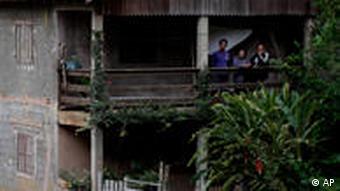 Building for rich and poor alike continues in high-risk areas

"The construction of apartments for the poor population is ignored by the government. It's an act of negligance," Vainer said. "As a result of this lack of living space, the poor are forced to move into areas on the slopes which are threatened by landslides."

The problem is exacerbated by the increasing trend of building town and housing developments for the richer social classes in unsafe areas such as Petropolis. "This shows how connected the authorities are with the real estate sector," Vainer said. "They authorize projects which should never be approved. But precedence is apparently given to the interests of the building industry."

"The dead people, this whole tragedy - this does not happen because there are no funds," Vainer concluded. "The money exists. It is just used disproportionately and in the wrong places."

Brazil is set to host the 2016 Olympic Games, and is investing heavily in infrastructure and security to makes its streets cleaner and safer. New environment programs too could help lift people out of poverty. (04.01.2011)

The Brazilian government has pledged to join international initiatives to combat climate change. But at home, it's struggling to juggle powerful business interests with efforts to protect its threatened rainforest. (15.06.2010)

Brazil's environmental ministry has approved the construction of a massive dam on the Xingu River. The country can now open bidding on a contract to build it, but some environmentalists oppose the project fiercely. (05.02.2010)