The eastern German state of Brandenburg has outlawed a biker gang active in various criminal dealings. Interior minister Joerg Schoenbohm says the federal government should consider a national ban of such groups. 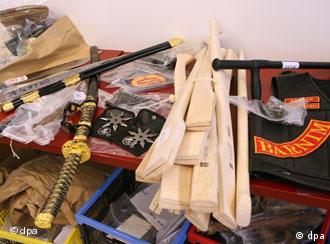 Police found a variety of weapons in the group's club house

The interior ministry of Brandenburg in eastern Germany banned the small motorcycle gang "Chicanos MC Barnim" on Monday. According to a press statement by the ministry, the move was part of a "forceful zero tolerance strategy" against motorcycle gang crime.

"This ban is a clear signal that we will counter this gang trouble with all means legally at our disposal," said interior minister Joerg Schoenbohm. "The formation and expansion of criminal associations will not be tolerated."

Schoenbohm said the motorcycle gang scene would be well advised to take this "sign of our resolve" very seriously.

Weapons instead of motorcycles

The gang, based in Eberswalde near Berlin, was founded in February 2009 and has 14 members. Police officials in Frankfurt/Oder searched members' apartments and the club house. Extensive documents and objects were seized, the ministry said. Authorities have also banned the organization's website. 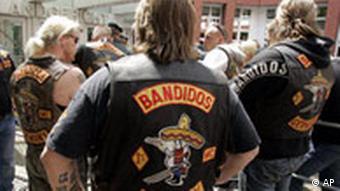 The Bandidos and Hell's Angels have been fighting for years

Local media report that hardly any of the members even had a motorcycle. But the police did find an array of weapons: Samurai swords, cudgels, brass knuckles and pistols. These were used to exert influence in the bouncer and drug scene in the region.

Motorcycle gangs have been rivaling each other across Germany for a number of years. But police authorities said the degree of violence in Berlin and Brandenburg has escalated in the past few months. Motorcycle gangs are competing for greater influence and more money in drug traffic and prostitution, as well as in the bouncer scene.

"The criminal activities of motorcycle gangs include offences which tend to occur behind closed doors, such as money laundering, blackmail, forging, arson or violation of narcotics and weapons laws," Schoenbohm said.

The ministry said it hoped to use the findings from this case to take action against motorcycle gangs together with other states and the federal government. 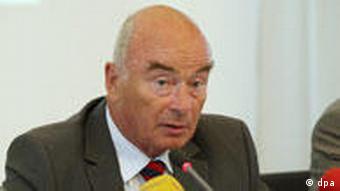 This is the first rocker gang Schoenbohm has had banned

Schoenbohm has called for a national ban on gangs such as the Hell's Angels or the Bandidos. However, the German interior minister can only implement such a ban if the states concerned file a common petition. Schoenbohm said he and his counterpart in Berlin, Ehrhart Koerting, had agreed on a collective course of action in the matter.

"If we have the opportunity for success together, then we will do so," he said.

Three German Hell's Angels gang members will go to jail for the assault and robbery of rival gang members. The case is the largest of its kind in Germany. (16.12.2008)

The trial of 14 Hell's Angels motorcycle gang members , the largest of its kind ever held in Germany, gots underway in Hanover amid heavy security. (15.12.2008)

A German court sentenced two members of the Bandidos biker gang to life in prison for the murder of a member of the rival Hell's Angels as 450 leather-clad bikers roared into the city of Muenster for the trial. (11.06.2008)