One of the boxing world's most famous champions, and one of Germany's most cherished sports legends, Max Schmeling, died this week at the age of 99. 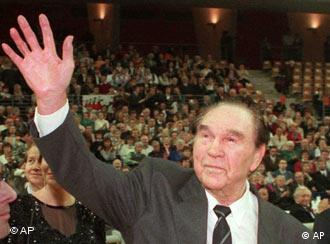 "I accomplished everything you can. What more can you want?"

Dominating in the ring, quiet and generous outside of it, Max Schmeling won one of the most storied bouts in boxing history and praise for his quiet resistance against Hitler and the Nazis.

Schmeling, who spent his years after boxing running a Coca Cola franchise, died on Wednesday in his home in Hollenstedt, near Hamburg. No cause of death was given.

"His success as a world heavyweight boxing champion, his international reputation as a sportsman, an idol, will not be forgotten," said Hamburg Mayor Ole von Beust. "Up until his death he was loved world wide and is an irreplaceable sporting and human role model." The city plans to hold a memorial service for Schmeling on March 1.

Born Sept 28, 1905 in Klein Luckow, a town in the Eastern German state of Brandenburg, Schmeling became a pro boxer in 1924 at the age of 19. Three years later, he became German heavyweight champ and then moved to the United States to train.

His American period proved the most successful and most difficult of his career, when critics portrayed him as a Nazi sympathizer as Hitler gained power in Germany. Schmeling won the world heavyweight crown in 1930, beating Joe Sharkey when the American was disqualified for hitting below the belt. He defended it in 1931 before losing in 1933 to Max Baer. 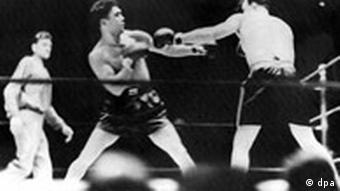 Hitler tried repeatedly to get the new celebrity on his side. Although Schmeling lunched with the German dictator and reportedly had long discussions with Goebbels, he refused to join the Nazi party.

In 1936, he scored a sensation by knocking out American boxing legend Joe Louis, at the time a young but promising boxer. When the two met for a rematch two years later, it wasn't just about boxing anymore.

Max Schmeling, right, throws a right at Joe Louis in an early round of their heavyweight bout in New York City, June 19, 1936. Schmeling knocked Louis out in the 12th round of the scheduled 15 round boxing match.

Schmeling, who made Hitler promise to protect US athletes during the 1936 Olympics in Berlin, was unfairly cast as the Aryan hero of Nazi Germany and Louis as the proud, fearless American. US President Franklin Roosevelt invited Louis to the White House and urged him to victory.

Their bout in front of 70,000 people at Yankee Stadium was over after 2 minutes and 4 seconds, when Louis sent Schmeling down to the mat for the fourth and final time.

"Looking back I'm almost happy I lost that fight," Schmeling said in 1975, according to the Associated Press. "Just imagine if I would have come back to Germany with a victory. I had nothing to do with the Nazis, but they would have given me a medal. After the war I might have been considered a war criminal."

When the Nazis terrorized Germany's Jewish population during Kristallnacht in 1938, Schmeling hid the sons of his Jewish friend David Lewin in his hotel room. His refusal to join the Nazi party annoyed Hitler who drafted him into a Paratroopers unit and sent him on dangerous missions.

Though he fought a few bouts after the war, he was never able to repeat his success and retired in 1948 with a record of 56-10-4, with 39 knockouts. He bought the Coca-Cola franchise the same year and settled down with his wife, a Czech actress he had married in 1932. Anny Ondra died in 1987.

He became one of Germany's most generous philanthropists and even supported Joe Louis, who had fallen on tough times. When Louis died in 1981, Schmeling reportedly paid for the funeral.

"I had a happy marriage and a nice wife," said Schmeling in 1985. "I accomplished everything you can. What more can you want?"

Soccer-crazy Germany mourns the death of its most outstanding soccer player and legend, Fritz Walter, who died on Monday at the age of 81. (June 18, 2002)