Both Gladbach and Wolfsburg drop points in Europa League

The Bundesliga's Europa League participants Gladbach and Wolfsburg both drew 1-1 on Thursday night, and both missed the chance to collect three points. 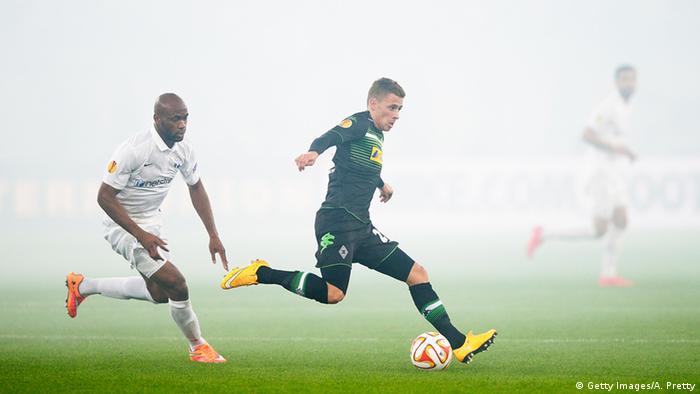 A pair of draws was not ideal for Germany's Europa League sides but, of the two, it was Wolfsburg who suffered more for not picking up a win.

With 8,000 travelling fans supporting them, Gladbach were keen to get their first win of the Europa League campaign. They started brightly too, but Max Kruse couldn't convert a glorious chance to open the scoring - with an open net at his mercy, the striker clipped wide.

Despite that positive beginning, it was Zurich who took the lead. Marco Schönbächler skipped into the area before laying across for Franck Etoundi to bundle home from close range. The lead was met by delight from the already raucous home fans, but they were soon subdued by their former manager's new side. Within a matter of three minutes, Lucien Favre's players were level as Havard Nordtveit hammered in a sensational drive from 25 yards out. 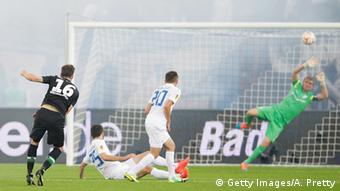 Nordtveit's strike was his first ever in a UEFA competition

The goals seemed to stun the game - the rest of the first half ebbed away with niggly tackles as the open nature of the early stages disappeared.

Thorgan Hazard started the second 45 minutes brightly but, despite all the Chelsea loanee's quick feet, the end product was disappointing. 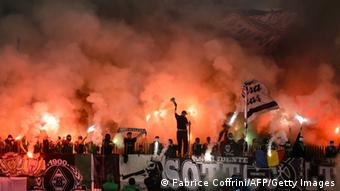 With the game drifting, Zurich's Amine Chermiti curled a free kick wide, before Branimir Hrgota saw his goal-bound header blocked at the other end. Despite substitutions on the flanks, Gladbach lacked the necessary pace and penetration.

Martin Stranzl's header across goal was the last real chance of the game, but that was saved smartly by a sprawling Da Costa. Gladbach, like their German counterparts earlier on in the evening, dropped two points on Thursday night.

Elsewhere in Group A, Villarreal secured a comfortable 4-0 win against Apollon, leaving them top of the group at the end of the night. After their draw, Gladbach now sit in third, one point behind Apollon. 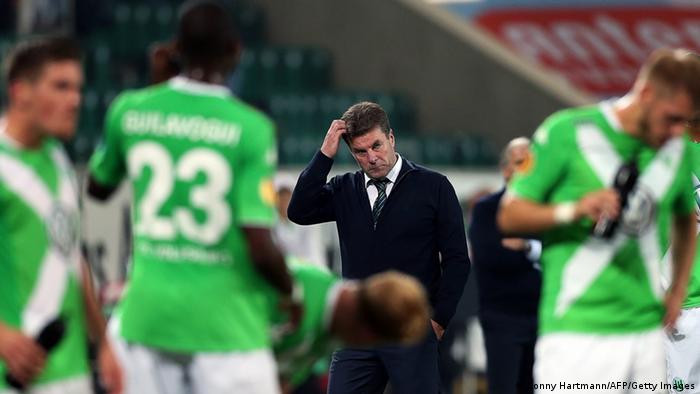 Lille have the best defensive record in France, and there was plenty of evidence of that on show in Wolfsburg. The stubborn visitors, including former "Wolf" Simon Kjaer, held Wolfsburg at bay in a subdued first 45 minutes. Ivan Perisic forced a reflex save out of Vincent Enyeama, but otherwise chances were few and far between.

In the second half, the game came alive. Joshua Guilavogui curled an effort goalwards, but Enyeama was on hand once again. The Nigerian goalkeeper proved a stopping point for Wolfsburg, who - try as they might - couldn't find a way past Lille and Nigeria's number one. First Perisic missed a glorious one-on-one chance and then substitute Bendtner, slipped superbly through by Kevin de Bruyne, blazed over.

Wolfsburg paid the price for their poor composure when Lille were awarded a penalty. Ricardo Rodriguez handled at the back post and Divock Origi tucked away the spot kick to give the visitors a surprise lead.

Pivotally, substitute Nolan Roux missed when it seemed easier to score when Origi found him in the box. Although it was only one chance, Lille paid the price for not taking it as de Bruyne smashed in a sumptuous 25-yard volley to equalize for the home side. 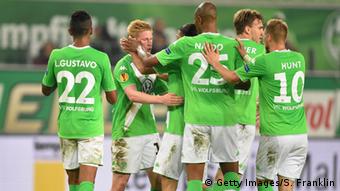 Wolfsburg's celebrations were more out of relief than joy

A late surge from Dieter Hecking's men saw Naldo denied by Enyeama as Wolfsburg drew at home, leaving them in a dangerous situation with only one point after two group-stage games.

Elsewhere in the Europa League

Despite having a man sent off, defending-champions Sevilla saved a point at the last in their 2-2 draw with Rijeka. Fiorentina, without the injured Mario Gomez, earned a comfortable 3-0 win away against Dinamo Minsk. Napoli won 2-0 away against Slovan Bratislava with Marek Hamsik scoring against his former club, while PSV suffered a last-minute defeat (1-0) away against Kevin Kuranyi and Dynamo Moscow.

In the later games, Tottenham drew 1-1 at home to Besiktas thanks to a last-minute penalty by Demba Ba. Celtic won 1-0 against Dynamo Zagreb, and Inter secured a 2-0 victory against Qarabag. Salzburg won 2-1 away against Astra.

Catch up with our live blog of both Wolfsburg and Gladbach's Europa League games below: